I  welcome moves by Dundee City Council to deal with the problems of derelict buildings. I am aware of a number of buildings in the West End which are derelict and which are not being properly looked after by their owners.
I am pleased to see the council listening to representations which people like me have been making and taking action on this issue. I understand that these are difficult times economically and that property owners may not have the money to redevelop their properties but they should be making sure that they do not deteriorate. The council must be vigilant we must ensure that no property owner uses dereliction as a means of getting planning permission. In the West End I am happy to pass on the details of properties which constituents have concerns about to this new group to make sure that appropriate action is taken.
You can read about the City Council's proposals here.
Posted by Richard McCready at 22:51 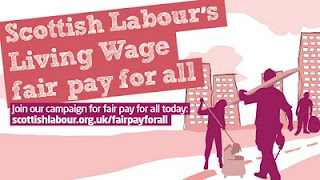 Today I  sought an update on Dundee City Council's plans to implement the Living Wage across the council and also to look at how it can be implemented by external bodies who currently provide services to the council. I have been calling on the council to implement this policy for some time and was very pleased when it was agreed by all councillors except Conservative councillors in March of this year.


I believe that the City Council should be taking a lead in ensuring that people are paid an appropriate rate for the jobs that they do. I also recognise that this would ensure that people have more money in their pockets which would be good for economy of the city in general. I was pleased when this policy was agreed back in March but it is now important that the council is seen as making progress in this area.

I have written to the Chief Executive of the City Council looking for an update on this important policy, it is important that it is implemented and that the campaign for the Living Wage across the city goes on.
Posted by Richard McCready at 15:49

Appalled at Vandalism of War Memorial on the Law 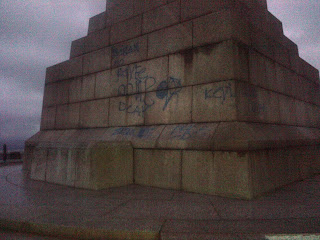 Today I have expressed my disgust that the War Memorial on the Law has been vandalised. On Monday evening I was at the top of the Law and noticed that there was graffiti on the memorial. I have contacted the council's rapid response graffiti removal team and been told that the offending graffiti will be removed as soon as possible.  Subsequently, I've been informed that the graffiti has been removed.  I have also contacted the police about this and hope that they might be able to catch those responsible.

I was appalled to see graffiti on the war memorial on the Law. It is a disgrace that such an important monument in the city has been defaced in this manner. The sacrifice of those Dundonians who gave their lives for their country should be remembered and should not be subject to such actions. I am glad that the council's graffiti removal team will be dealing with this promptly but I also hope that the police might be able to take appropriate action against the vandal who did this.

Posted by Richard McCready at 15:39

On Monday evening I joined a small group of people who walked to the top of the Law and marked the anniversary of the dropping of the atomic bomb on Hiroshima.  It is important to remember the many people who were killed by the atomic bomb and its on-going impact since 1945.


I have been doing my little bit on this for a number of years and I am still convinced of the moral case against nuclear weapons.


We should remember those who died in Hiroshima and work towards a day when that can never happen again.﻿
Posted by Richard McCready at 00:26