Campaign to be a Living Wage City 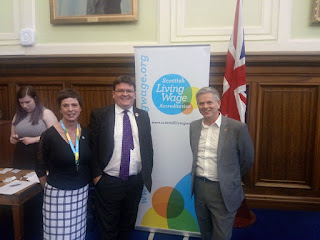 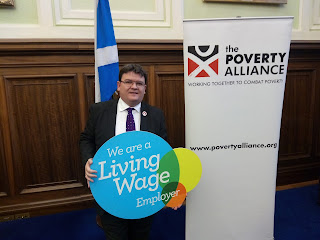 It was good to hear about what the council is doing in conjunction with the Poverty Alliance, the Living Wage Foundation and the Scottish Government to ensure that more companies sign up to the Living Wage and there are special accreditation rates over the next month.  I want to work with anyone to make our city a Living Wage economy and improve the lot of very many of our fellow Dundonians.
Posted by Richard McCready at 19:49

I was sad to hear of the death of former Labour councillor Chic Farquhar.  Chic served Dundee and more especially Lochee as a councillor for 42 years.  He held a variety of posts including Lord Provost.  He was my predecessor as Convener of Leisure and Arts.  He was a hard act to follow.  Before I heard of his death on Tuesday I was thinking about Chic at the celebrations for the 150th Anniversary of the McManus Galleries.  Chic was the political lead for the refurbishment of the McManus, I took over responsibility for this when I was elected as Convener of Leisure and Arts.

Chic's role as 'Mr Lochee' is relatively well known.  He did have a wide variety of interests.  For example, he was hugely supportive of disabled sport in the city through the Dundee Disability Sports Council.  He was also, for many years, the Chair of the Dundee Sports Council promoting the work of volunteer sports clubs across the city.

Chic was, of course, a stalwart of the labour and trade union movement and served the movement well over many years.

Whatever their politics someone who has served their community for 42 years has made a strong contribution to their community and our city. Whilst many people will comment on Chic's political career it is important to note that he will be missed by his friends and family and my thoughts are with them.
Posted by Richard McCready at 10:00