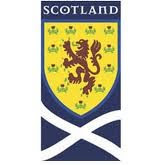 I have re-iterated my call for Scotland international football matches to be played in Dundee. He was speaking after the SFA announced that St Mirren Park in Paisley is to be the 'home' of the Scotland under-21s team until 2013.

In November 2010 after a full Scotland international was held in Aberdeen I wrote to the Chief Executive of the SFA asking if Dundee could also be considered for international matches or at least for under-21 matches. I received a response which did not rule out the possibility of friendly matches or under-21 matches being played in Dundee. I was surprised to hear today that the SFA have chosen St Mirren Park in Paisley as the base for under-21 matches until 2013. According to the AA St Mirren Park is all of 19 minutes away from the base of the full national team at Hampden Park in Glasgow. I have nothing against St Mirren Park but I do think that the national team should not only be in the west coast. I note that other international football teams move around, for example Spain do not play all their matches in Madrid, indeed the upcoming crucial match with Scotland will be played in Alicante.


I will be writing to Stewart Regan, the Chief Executive of the SFA, again asking that Dundee be considered for matches by the under-21 squad and that some consideration is given to hosting friendly international matches in Dundee.

Hosting international matches in Dundee would be good both economically and in sporting terms for the city. It would be good to have the name of the city reported abroad in the media when a match is taking place. It would also be good to have people visiting the city and using our hotels, pubs and restaurants. It would also give young people the chance to see top quality sport in our city which may well encourage them to play football.

Posted by Richard McCready at 12:42


I am really disappointed that Royal Mail have made this decision. I think that it is wrong. A city centre presence, in Crichton Street, made sense to me. I accept that the shop at Crichton Street required some work to bring it up to modern day standards but I do not think that this was beyond the Royal Mail. Crichton Street has excellent links to public transport, the same cannot be said for the new locations.

It is farcical that someone like me who lives in the West End would have to travel past the Dundee Central delivery office in Edward Street and end up at Baird Avenue to pick up parcels.

I will be seeking a meeting with the Royal Mail to raise my concerns and I have written to Vince Cable, the UK Government minister in the Tory- Lib Dem Coalition responsible for the Royal Mail highlighting my concerns.

Posted by Richard McCready at 00:05

On Tuesday morning I attended a very brief vigil to mark the anniversary of the nuclear bombing of Nagasaki. I think that it is important to remember the events of 1945 and their on-going impact. As I have said before we need to consider our own reaction to nuclear weapons - shouldn't we be working for a world without nuclear weapons?

Posted by Richard McCready at 23:28

I am really pleased that my colleague Jenny Marra has started a campaign to get a National Indoor Football Academy to come to Dundee. Dundee has a proud sporting tradition and our city should have the very best in terms of facilities. As Leisure, Arts and Communities Convener I was proud to initiate the new swimming pool in Dundee, and to campaign for a regional gymnastics centre for Dundee and investment in our sports facilities. The National Indoor Football Academy would be another feather in Dundee's cap. If you support this, please sign up to the petition.

Posted by Richard McCready at 00:05

On Saturday evening I joined a hardy band of local people to march up the Law to mark the anniversary of the nuclear bombing of Hiroshima. I am opposed to nuclear weapons and think that it is important to reflect on the impact of the bombing of Hiroshima. I believe that using nuclear weapons or threatening to use nuclear weapons is immoral. My views were outlined in the Scotsman in 2007 when I was the National Secretary of Justice and Peace Scotland, these arguments were from the viewpoint of Catholic social teaching but I also believe that there are many, many secular arguments against nuclear weapons. My colleague and friend Cathy Jamieson has made many of these arguments in an article in Saturday's Guardian.

It is important that we consider the moral issues around nuclear weapons and especially whether Trident should be replaced. It was good to take part in Saturday's event and to listen to Jenny Marra MSP, Sandy Constable, Rev Allan Webster, Shiona Baird and Mary Henderson, well done to those who organised the event.

Posted by Richard McCready at 23:14