The Scots who fought Franco 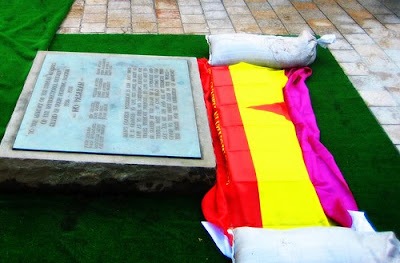 Tonight I enjoyed watching the programme on STV about the Scots who fought Franco. It was good to hear a little about the International Brigaders from Dundee in the programme. I think that it is important to remember this fight and the sacrifice made by many Scots in Spain.

I am in the process of reading the book associated with this programme Homage to Caledonia it is really interesting. Last year I was happy to take part in the rededication of the Spanish Civil War memorial in Dundee, you can see some pictures of that event here.

I am looking forward to the memorial moving back to Albert Square when the work on the McManus Galleries is finished.
Posted by Richard McCready at 22:44

As Scottish Labour's spokesperson for Leisure, Arts and Communities on Dundee City Council, I have congratulated everyone concerned with the award of three green flags to Dundee parks, Baxter Park, Barnhill Rock Garden and Trottick Mill Ponds Nature Reserve. I have also written to the Leisure and Communities Department congratulating them on their input and asking them to consider entering other parks for this award next year.

I want to offer my congratulations to everyone concerned in the gaining of these awards. The Green Flag is an important national award which demonstrates the high standard of parks available in Dundee. These awards reflect hard work and excellent partnership working in these parks. The local groups of friends of the various parks deserve particular praise for their voluntary efforts on behalf of these excellent community resources. I think that the process of applying for Green Flag recognition has been beneficial for Dundee's parks it has encouraged best practice and ensured that a better service is offered. I have written to the Leisure and Communities Department congratulating them for their input to these awards and I have asked them to consider including other parks in the entry for these awards next year. Dundee's parks are an excellent asset for the city and its citizens we should all be working together to ensure that they continue to improve in years to come.'


For more information on the Green Flag award click Green Flag
Posted by Richard McCready at 22:17 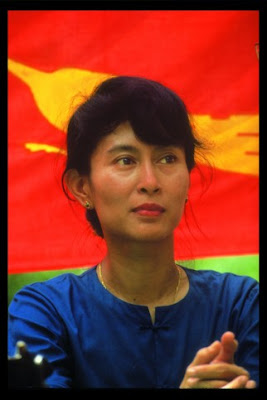 Like many people I was appalled by the continued mistreatment of Aung San Suu Kyi by the Burmese military. The City of Dundee gave Aung San Suu Kyi the Freedom of the City and I think that it is important that we do more than that and that the City Council continues to show our support for her and for the return of democracy in Burma.
I have asked the Lord Provost to raise the issue at the next meeting of Dundee City Council. Dundee City Council unanimously gave Aung San Suu Kyi the Freedom of the City of Dundee and we must continue to support her. I know that the actions of Dundee City Council will not by themselves secure her freedom or bring about democracy in Burma but we should show solidarity with her. The Council should make its voice heard and ensure that our voice joins the many voices being heard which are calling for democracy in Burma. I know that Amnesty International in Dundee and the Burma Campaign in Dundee continue to do a good job of making their voices heard, I think that the council should join with them. The decision to imprison Aung San Suu Kyi further is clearly politically motivated and we should add our voices to the voice of the UK Government in condemning this and calling for international action. The Lord Provost has responded to similar requests in the past and I am sure that he will do so again.
To find out more about the situation in Burma visit the website of the Burma Campaign, or Amnesty International.
Posted by Richard McCready at 20:59

This morning I was at the Co-operative Party's Summerfest in St Andrews the main speaker this morning was John McFall the Labour and Co-op MP for West Dunbartonshire and chair of the House of Commons Treasury Select Committee. For me it was good to see John, he taught chemistry at my school. John was speaking on The Global Financial Crisis – Co-op and Mutual Solutions. It was great to listen to someone who is so knowledgeable about the financial markets. It is clear that we need to have better and clearer regulation in the financial markets. We need to ensure that rewards are for long term performance rather than for chasing quick and unsustainable profits.

We need to ensure that the boards of banks include representatives of workers and stakeholders like customers. John also led a very interesting discussion on whether there should be gender balance on the boards of banks arguing that one of the problems was that bank boards were generally made up of very similar people and that non-executive directors had not asked the right questions in the run up to the credit crunch. It is clear that co-operative and mutual solutions offer a different way of running banks and they should be examined by the government.
The Co-operative Party is running a campaign on this called the Feeling's Mutual it's worth a look.
Posted by Richard McCready at 20:06

I attended the brief service at the top of the Law to commemorate the anniversary of the atomic bombing of Nagasaki this morning. It was a small turn out but it is important to remember the atomic bombings of Japan and to work for a world where there are no nuclear weapons.
Posted by Richard McCready at 22:57