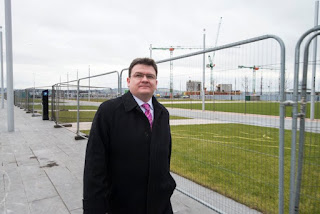 I'm calling for Dundee City Council to protect music fans from rip-off ticket prices at the Slessor Gardens venue.  I welcome the addition of this new music venue to the city and hopes that it is a huge success.  Last Friday when Olly Murs tickets went on sale just a couple of hours after they went on sale I was able to find tickets on sale on secondary websites with a mark-up of at least 50%.  The Little Mix concert in Slessor Gardens in June is apparently sold out yet over 200 tickets were for sale today at higher than the face-value of the ticket for this concert.

I welcome the development of Slessor Gardens as a music venue and I hope that it is a success.  I do have concerns though that the council has become complicit in ripping-off music fans.  Slessor Gardens belongs to the council, the council is hiring it out to music promoters who are then selling tickets which quickly make their way on to the secondary ticket market at much more than face-value.  Often the secondary ticket selling website is closely associated with or even the same company as the primary or face-value ticket selling website.  There are allegations of collusion between websites which allow re-sale website to harvest large numbers of tickets for sale at above face-value.

People unable to get tickets from the ticket website often end-up buying tickets from re-sale websites from people or companies who have never had any intention of attending the concert.  For example, Olly Murs tickets went on sale a week ago on Friday, only a couple of hours after they went on sale one re-selling website  Stubhub claimed to have 22 tickets available for this concert, tickets for this concert are priced at either £43.45 or £60.50, on Stubhub the prices varied from £75 to £94.25.

I understand that some people who buy tickets today for a concert in July will be unable to attend due to illness or work commitments for example, but it beggars belief that 22 people bought tickets for a concert on Friday morning with the intention of going and before lunchtime had worked out that they were unable to attend and had already put their tickets up for sale on a re-sale website, and this only on one website.

I know that many young people in Dundee were disappointed to apparently miss out on tickets to see Little Mix.  It is therefore a little surprising to see that on just two of the re-sale websites Getmein and Viagogo nearly 300 tickets were available priced between £76.89 and £187 each for this 'sell-out' concert.  Surely there cannot be 300 people who bought tickets for this concert and cannot now go.

I am a football fan and my understanding is that if you stood outside Dens or Tannadice and tried to sell tickets for more than their face value you risk being arrested.  Why do similar rules not apply online?  It is alleged that many of these resellers use technology to harvest tickets which are put up for sale online at face value and that they only do this with the intention of trying to cash in by selling at inflated prices.  Some of these re-sale websites are linked to original sale website, for example Getmein is owned by Ticketmaster.  This needs to be regulated.

I think that people or companies profiteering on the sale of tickets should be ashamed of themselves.  There needs to be much more regulation of this industry.  There is a need for much more transparency.  The UK Government is looking at this issue and I have written to the Secretary of State for Culture, Media and Sport, Karen Bradley, asking when the UK Government is going to take action to protect the interests of music fans.

Dundee City Council should look to create contracts with promoters at Slessor Gardens and elsewhere which prevent music fans from being ripped-off.  The way the market works just now is at best unethical and should be made illegal.  I want Slessor Gardens to develop as a music venue but I am appalled that the council is colluding with sharp practice by music promoters.  I have written to the council asking them to look into this matter and I would hope that before any other concerts are arranged that Dundee City Council has come up with a way of preventing fans being ripped-off.
Posted by Richard McCready at 00:55