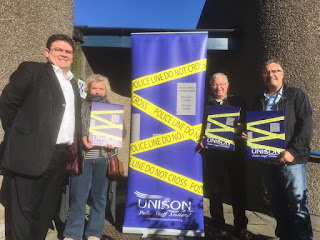 On Saturday I was pleased to be joined by a number of local people campaigning to keep Ryehill Police Station open.  Local people were coming forward unprompted to sign my petition against the closure.  You can sign the petition here.

I was really pleased to be joined by members of the Unison Police Scotland Staff branch, who showed their support for the campaign.  Cuts in police staff numbers have had a big impact on the work which Police Scotland does.  Indeed there are now cases of very well-paid, highly trained across a variety of roles police officers who are empowered to work on the streets to make places like the West End safer sitting in offices doing tasks which were previously done by police staff.

My campaign to keep Ryehill Police Station open will continue over the next few weeks.
Posted by Richard McCready at 17:11