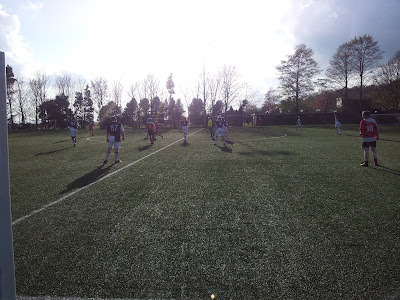 Tonight I attended a football match to promote awareness of the White Ribbon Campaign.

I would like to congratulate all those involved in organising tonight's match and all those who took part in the match. One team was made mostly of ex Dundee United players, although Barry Smith of Dundee FC was playing for them as well, the other team was made up of supporters of the White Ribbon campaign.
Posted by Richard McCready at 23:43

This afternoon I attended a meeting of the City Council's Scrutiny Committee. There was a very good report on community learning in the area covered by the catchment area of Braeview Academy. The report raised a slight concern about involving young people in representative structures. For example, the average of a Community Councillor is apparently 63 years old. I know that the council has done a lot of work with young people such as through the Youth Council.

I asked a question about the report on Braeview Academy. The report talked about Curriculum for Excellence and the school working with partners on this issue. The headteacher spoke about the various partnerships the school was involved in, teaching young people subjects like hairdressing and car mechanics. Curriculum for Excellence is an important change in the education sector, the City Council's Education Department are confident that Dundee's schools are prepared I hope that they are correct in this assertion.

There was a report on the corporate performance of council with regard to the visitor numbers to council supported museums. The refurbishment of the McManus Galleries has been an outstanding success. After an initial spike in numbers in the year 2010-11 number have fallen back a bit in 2011-12. I asked if numbers were up on the position prior to the closure of the McManus Galleries. I was pleased to hear that visitor numbers are up from the period pre-closure. I also asked about how Leisure & Culture Dundee were working in partnership with the V & A, I knew that everyone in the committee is looking forward to this world-class British institution opening in Dundee but it is important that the V & A should not be to detriment of our other cultural attractions. I was reassured that work is underway which will build partnerships with the V & A. The recent exhibition of Cecil Beaton photographs of the Queen was a start of this process and more is on the way.
Posted by Richard McCready at 22:49 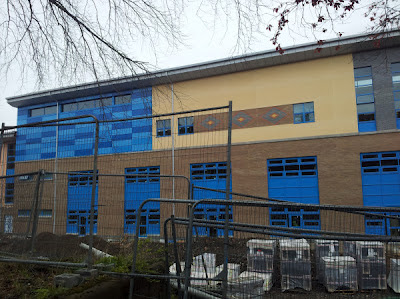 Today I attended a site visit to the new schools in the West End at Blackness Road. The schools, 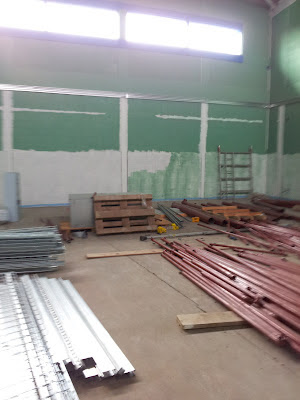 St Joseph's, a replacement for Park Place Primary and for Park Place Nursery. It was good to see that progress is being made on the building. They appear to be on track for the schools opening after the October holidays this year. The schools will certainly be different from their current settings. I hope that they are an improvement and that the moves to these schools is successful for everyone involved. 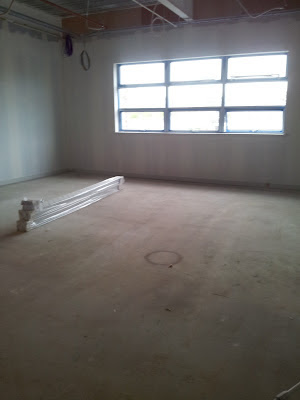 The pictures here show the outside of the schools from Blackness Road. The green room is the new gym hall and the other picture is of a classroom.

I want the new schools to be a success when they open. These schools opening on this site will also have an impact on the local community in this part of the West End. I am working with the council to try and ensure that disruption is minimised and that children can get to and from the school as safely as possible.

Posted by Richard McCready at 22:48

It is important that the university is a good neighbour. It is such a big institution that it is inevitable that problems occur from time to time. Generally I find that the University is quick to deal with issues that arise and is always keen to find a solution.

It is also really important that the city recognises the importance of the University to Dundee's economy and reputation. The City Council needs to be sure that it is supporting the university when it can.

I am happy to raise concerns anyone has with the University, please do not hesitate to get in touch.
Posted by Richard McCready at 21:13

Tonight I was at the last meeting of this term of the Development Management Committee, this was a very brief meeting. There was a very brief agenda, and the Convener thanked all the staff who had helped run the fifty-something meetings of the committee since 2007.
Posted by Richard McCready at 23:36

No place for Loan Sharks in Dundee 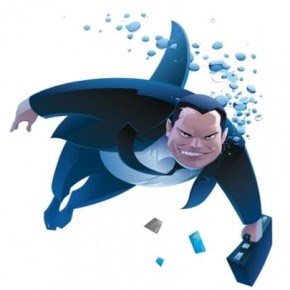 Today I have said that there is no place for Loan Sharks in Dundee. I was responding to claims by Tayside Police that Loan Sharks were operating in Dundee and that this was leading to other crimes such as shop-lifting. I believe that there should be a wide range of financial solutions available to people across the city, such as credit unions. I'm also concerned that changes to welfare provision from the Conservative/Liberal Democrat Government will lead people into more financial hardship.

There can be place for Loan Sharks in Dundee. The police, the council, voluntary organisations and financial organisations should be ensuring that there are viable alternatives to loan sharks right across the city.

I support credit unions and I think that the council should be looking to see what extra we can do to support Discovery Credit Union so that it can take its work right across the city. Credit Unions offer low-cost loans to people and hopefully keep them out of the hands of loan sharks. We also need to be sure that people understand credit and what they will have to pay back if they take out credit.

We should also be very concerned about the high cost of credit from some high-street lenders. I support my colleague Stella Creasy MP's campaign against what she calls 'Legal Loans Sharks'. Her campaign calls for caps to be imposed on the cost of legal credit. This has led amongst other things to a review by the Office of Fair Trading into so-called 'payday' loans.'

There are also problems caused by banks, some of which we own, withdrawing their services from large parts of the community, as we have seen with bank closures in Dundee over the past couple of years.

Everyone must do all we can to stop loan sharks operating in Dundee. These people exploit other people's misery and cause more problems than they solve.
Posted by Richard McCready at 22:49

Welcome for Movement on Dundee Station 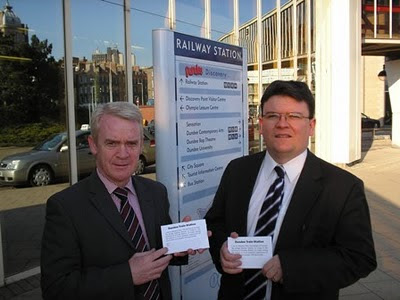 I welcome movement on improving Dundee Station. The SNP Administration brought forward proposals to the very last meeting of the current council to be held on 23rd April 2012.

I have long been campaigning for this investment in my ward. It is essential that Dundee has a rail station which is fit for purpose in the twenty-first century. I am pleased that progress is being made at long last. Regenerating our city is important and the whole Waterfront development will go some way towards doing this. Improving the station will have an impact on people across the city and will also give visitors to our city a warm welcome. The current station is a very poor advert for our great city. I am glad that the plans suggest keeping much of the Victorian infrastructure at platform level, I have to say though that these could do with a little bit of a revamp and I hope that this will be included in the project.

I call upon Network Rail to invest in our city and in the rail infrastructure of our country and come up with the final £2.2 million to make the project possible.


We should be investing in the rail network and supporting greater use of Dundee Station. I was glad when the Scottish Government recently scrapped their daft plan not to have through trains to or from Dundee to England. We also need to promote new services, such as the Tay Estuary Rail Scheme and we need to look at more regular services to Scotland's other cities. I hope that the refurbished station will be a transport hub for the city and that it will have much better links with the City Centre and West End than at present. I hope it will have better links with buses than at present and I hope that taxis will be catered for in the new station.

I hope that this overdue investment in our city will happen sooner rather than later and that it will be a great success for our city.

The photograph shows Jim McGovern MP and myself campaigning for improvements to the station.
Posted by Richard McCready at 16:00

Disgraceful Vandalism at the McManus Galleries

I have responded to reports of vandalism at the McManus Galleries. As the councillor who took the lead in the refurbishment of the McManus I am sickened by vandalism to this important part of Dundee's heritage. It is disgraceful that anyone would vandalise this beautiful building. The McManus belongs to the people of Dundee so it is likely that in some sense whoever has done this has done it to their own property. This has caused as much as £2,500 worth of damage. There are much better things that £2,500 could be spent on than repairing the work of vandals. I hope that those who are responsible are caught.

Only recently I visited the excellent FCB Caddell exhibition at the McManus.
Posted by Richard McCready at 15:45