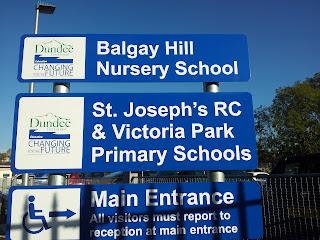 The new West End schools finally opened for business yesterday I was pleased to join pupils from St Joseph's and  Victoria Park Primaries and Balgay  Hill Nursery walking to their new schools from their old schools yesterday morning.  It was great to see the excitement of the young people as they went to their new school.  It was good to see the new campus open after a process which has had its ups and downs.  I hope that Victoria Park, St Joseph's and Balgay Hill are successful in their new homes and I wish them all the very best in their new schools.

I was pleased to see that the various traffic measures which were to be implemented had been.  I had sought an assurance about this from council officers in September and I am glad to say that they delivered on their promises.  As I said at that time I will be keeping a very close eye on road safety in the area.  If anyone has any concerns about this I would be very grateful if they could raise them with me and I will seek prompt action from the City Council.

Posted by Richard McCready at 16:06

I was very sad to hear of the death of the man described by today's Courier as 'Dundee's Bard' Michael Marra.  I would like to offer my sympathy to Michael Marra's family and friends.  His death may well be a loss to the artistic community but it is a great loss to his family at a young age.

Michael Marra wrote many excellent songs which spoke eloquently of Dundee and of his life experience.  I am particularly fond of his work at Dundee Rep on the Mill Lavvies.  The song above comes from that play and is one which I particularly like.  I also liked the way which many of the locations of songs he wrote were in the West End of Dundee.  As an adopted Dundonian I hope that I am also able to draw attention to his song 'Mother Glasgow' which speaks about the city I was born in.

I was thinking that there should be a lasting tribute to Michael Marra in the city that he wrote so movingly about, and I was thinking about what it could be.  I was therefore pleased to see that his family are setting up a trust fund to help bring the 'El Sistema' music project to Dundee.  El Sistema is an intensive music tuition programme for children and young people I would certainly like to see it in Dundee and if it did come about I am sure that it would be a fitting tribute to a man who brought great joy with his music and who also made people think with his writing.

I hope that Michael Marra's contribution to the culture of Dundee, of Scotland, and indeed the world will be marked in a fitting manner and that in so doing some comfort will be given to his family.  R.I.P.
Posted by Richard McCready at 13:04

On Monday evening I attended a meeting of the Development Management Committee I spoke on item 4 which sought to change the planning conditions on the former Maths Department of Dundee University.  I am very happy for this site to provide accommodation for students, it is to all intents and purposes on the university campus.  I did however raise some concerns about the ease by which Section 75 conditions which put conditions on a development before it gains planning permission are being amended.  In this case the Section 75 condition was that there would not be Houses of Multiple Occupation at this site.


Firstly, I was concerned that market conditions were being used as a  material consideration in planning decisions, I am sure that councillors had been told in the past that our opinions about whether a project is viable or not were not an issue for this committee?

Secondly, I wanted to have some reassurance that if this report was agreed that this does not sound the death knell for Section 75 agreements and in particular for the restrictions on the number of HMOs.  In the West End HMOs are generally a good thing because they ensure higher standards in the rented accommodation, mostly used by students.  However, I think that we have a duty to ensure that the West End is a vibrant and mixed community with students and families living in 'harmony' with each other.  This is good for the economic vibrancy of the West End and the city in general and also provides a better student experience in my opinion.  HMOs should not be the norm in the West End.  I am worried that we are sending out the message that all you have to do to get planning permission is say that you will agree to a Section 75 agreement and then come back to the council and say that you cannot make money on that basis and get it changed.  On that basis we will soon be recompensing the customers of William Hills and Ladbrokes for losing bets.

I was pleased to receive the reassurances that I sought but it is important that this situation is monitored to ensure that the vibrant nature of the West End.  As someone who lives in the West End I think that this is important for the area.
Posted by Richard McCready at 15:49