At this week's Social Work and Health Committee I spoke on the report which looks at the standards in Care Homes in the city. I pointed out that it is essential that the council ensures that it promotes high standards in care homes.  Through the Free Personal Care policy millions of pounds are being spent in Dundee on care homes.

I would urge anyone who has a loved-one in a care home to take a good look at this report.  I raised the iniquity that council run care homes have inspection reports reported to the council's Scrutiny Committee.  Bear in mind that there are huge amounts of public money being spent in the non-council run care homes.  I think that the public deserve that someone will examine the reports written by the Care Inspectorate.  We cannot allow public money to be spent without some oversight of how it is being spent.  I was pleased that the Convener of Social Work and Health agreed with my suggestion that we should be looking for some way to ensure that reports for all care homes where public money is spent are reported to the council's Scrutiny Committee.  The reason for this is to ensure that standards in care homes across the city are improved for all of the vulnerable people who are using these services.

I look forward to progress on this issue.
Posted by Richard McCready at 00:31

On Wednesday I  moved a motion at the City Council's Scrutiny Committee calling for the council to bring forward a report to make schools cashless. The Scrutiny Committee was considering a report on the 'Processes and Systems in Place for the Management of Cash within Schools'. This report came forward as a result of the misappropriation of cash with a school in the city.  I amended the report to ensure that a report will be brought forward which will look at how smart-card technology can be used to move towards a scenario where money is all but eliminated from schools.

I am concerned that money being handled in schools can lead to problems such as the misappropriation of cash, or bullying of young people for their money, or young people being stigmatised for not having money. I had received a briefing from council officers which stated that the council could use the smart-card technology available to it a lot more and do more things and innovate. I was pleased that there was cross party support for my idea at the Scrutiny Committee and that Councillor Jimmy Black seconded my idea.

I think we could get to a point where no child has to take cash to school, when all meals could be paid for using a smart card. Where schools trips and other incidental expenses could be paid for using a smart card. I think that there is a lot of scope here to improve security as well as eliminating any stigmas associated with having access to events subsidised, for example. The technology might not be ready just yet but I think that we should have as our long-term goal creating a cashless environment in our schools. I am looking forward to a report being brought forward to the Education Committee in the near future.
Posted by Richard McCready at 23:40 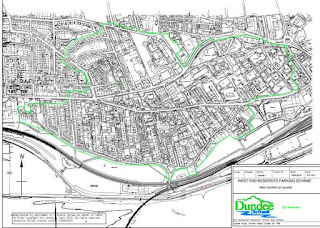 On Tuesday evening I attended a meeting of the West End Community Council .  The main item was a discussion on the important issue of the proposed Residents' Car Parking Scheme in the West End.  There was a good attendance at the meeting and the council's Head of Transportation outlined the plans and answered questions.

I gave my views on this to STV News on Wednesday you can see this here, with the interview starting at 13.06 minutes, or by clicking below:
Posted by Richard McCready at 10:43 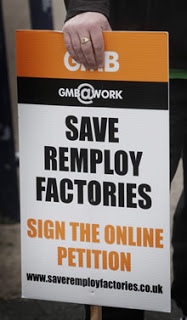 At the meeting of the Policy and Resources Committee last night I was pleased to be able to second the Lord Provost when he moved that an Action Group on Remploy should be set up.  I called for an item to be placed on the agenda on Monday evening about the closure of Remploy.  I am glad that the council's Administration listened to my call and brought forward these proposals.

I think that we, as a council and as a city, should make clear our extreme concern about proposed closure of the Remploy factory in Dundee, as it says in the note, but it is important that we look at practical things that can be done either by the council or others to assist the workforce at Remploy.

On Monday I received an email from the Rev Erik Cramb, who as many people will know is a former Industrial Chaplain in the city; people will also know that Erik is disabled.  In his email Erik said that he speaks from 'personal experience of being a person with a disability fortunate enough to have been able to use my abilities in paid employment.'

He went on, 'As well as income, employment gives a unique sense of self-worth.  Even when the employment is subsidised, there is still the satisfaction of being able to make as much of a contribution to society as you are able.  In terms of purpose in life this is light years away from being unnecessarily stick on benefits without the opportunity to use your abilities.'

Mr Cramb suggest s a few ideas for the future of the future of Remploy and I will be tabling these to ask that the Action Group takes his practical suggestions on board.  A few years ago both Erik and I served on a Corporate Social Responsibility working group of the General Assembly of the Church of Scotland.  I think that it is safe to say that the actions of Remploy and the UK Government over the last few days leave a lot to be desired in terms of corporate social responsibility.

It was important that the council sent out a clear message which said that we condemn the way in which the closure of Remploy had been handled by the UK Government.  It is now time to look for ways in which the UK Government, the Scottish Government and the City Council along with the workforce and their trade unions, and civic society search for ways to protect the jobs at Remploy.
Posted by Richard McCready at 12:05

As regular readers will be aware I have been campaigning against legal loan sharks this morning I attended a briefing session on illegal loan sharks.  This session was hosted by the government organisation Stop Loan Sharks.

It was good to hear that something is getting done to deal with this terrible trade, which targets the poor and the vulnerable.  It was disappointing to hear that loan sharks are probably operating in Dundee.  You can find out more about loan sharks in this leaflet.  We heard about an example of an illegal loan with an APR of 719,000%, and even of an APR which would be the equivalent of 11 million per cent.

Call for Remploy to be discussed at Council Meeting 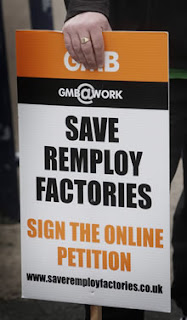 On Friday I wrote to officials of the council seeking to place an item on the agenda of the council meetings on Monday night about the disgraceful decision to close the Remploy factory in Dundee.
The announcement of the closure of the Remploy Factory in Dundee is a blow to the workforce, and is all the more cruel in the run up to Christmas.  It is disgraceful that the announcement was sneaked out at Westminster just days after the minister, Esther McVey, told my colleague Jim McGovern and other MPs that she would be ready to visit the factory in Dundee - which she must have known was already marked for closure.  My colleague Jenny Marra MSP has also called for action on this issue. My trade union, the GMB, which represents many of the members at the Remploy factory in Dundee has described the closure announcement as 'despicable.'
I am seeking permission to place an item on the agenda of the City Council or the Policy and Resources Committee on Monday evening which would condemn the decision by the UK Government, call on the UK Government to think again about closure or bring forward proposals to find alternatives to closure.  The UK Government should also bring forward proposals to find employment for those who are being made redundant at Remploy.  The Scottish Government should look at the sort of support which it can give to Remploy, for example, are there orders which the Scottish Government is about to let which could be procured through Remploy, new police and fire uniforms or protective clothing for example.  The City Council should also bring together a plan to help the factory and support the workforce there.  I hope that my request will be agreed to as it is important that the City Council speaks with one voice on this important issue and that we stand up for vulnerable workers in the city.
Posted by Richard McCready at 12:36 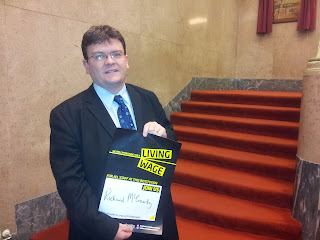 I support the efforts being made by Dundee Labour Students to get all employees of the University of Dundee paid the Living Wage.  I campaigned for Dundee City Council to pay the Living Wage, and I believe that it should be paid right across the public sector.

I am more than happy to support this campaign by Dundee Labour Students to get the Living Wage paid at Dundee University. I strongly supported the moves which made the City Council pay the Living Wage and I believe that everyone in the public sector should be paid the Living Wage. As the local councillor for the university, and indeed as a graduate of the university, I will be writing to the Principal of the University setting out my support for the campaign and asking that he give serious consideration to implementing it.
You can show your support for this campaign by Dundee Labour Students by signing their online petition.
Posted by Richard McCready at 16:20