The scheme proposed for Dundee would have been good for the economy of Dundee, good for tenants in Dundee and good for the environment in Dundee. I was pleased that the City Council agreed a response to the UK Government consultation on feed-in tariffs this week. It is important that we use any opportunity that comes along to produce cost-effective renewable energy.

I agree with my Labour colleague Caroline Flint that the UK Government must think again on this important issue and do what it can to sustainably support the solar power industry.
Posted by Richard McCready at 14:32

Tayside Police Board and Tayside Fire and Rescue Board 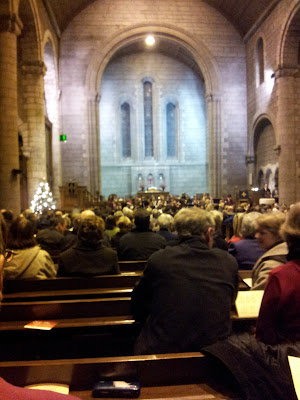 On Tuesday evening I was really pleased to be able to get to the Harris Academy Christmas Concert which was held at Logie & St John's (Cross) Church. I really like the mix of the traditional nine readings and carols with the modern musical interpretations of some Christmas classics.

This is a great event which is enjoyed by the school community and others. I also enjoyed the hospitality offered by the school's PTPA in the hall after the concert.

Harris clearly has a great many talented students and I would like to say well done to them and to everyone who helped them prepare for the concert.
Posted by Richard McCready at 13:00

I have said before that there is a need for greater bus regulation but I am calling for it again. Yesterday Dundee pensioners complained about the bus service over the Christmas and New Year period and a report from the Competition Commission was published which has suggested that across the UK there is a lack of competition in the bus market.

People expect the local bus service to be just that - a service. Unfortunately bus companies are run to try and make a profit. In the West End we have seen changes which have made the service poorer for people who live in the Tullideph, Pentland and Ancrum areas, many of these people are elderly. We have also seen how difficult it was to get a suitable service between the West End and St John's High School. The Competition Commission issued a report yesterday which highlighted uncompetitive nature of the bus industry across much of the United Kingdom.

The solution to these problems in my opinion is the introduction of a much greater level of regulation in the bus industry. I have absolutely no difficulty with bus companies making a profit, but I do think that they should be made to deliver a service which meets the needs of the people they serve. In order to operate in Dundee, for example, the council should be able to ask them to deliver a certain level of service which meets social needs in the city. In my mind this would include things such as ensuring good services to schools and hospitals and areas with large elderly populations but would also include things like services on Boxing Day.
Posted by Richard McCready at 12:31

Call for focus on new ways to generate electricity

As Dundee Labour's Environment spokesperson on Dundee City Council I have called for the City Council to look for new ways to promote renewable electricity generation in the city. This came as the council's Policy and Resources Committee debated problems caused to plans for photovoltaics on council property due to changes in the feed-in tariff from the UK Government.

I welcome the report which was put before the committee on Monday evening which highlighted that the proposed scheme cannot go forward as a result of changes made to the feed-in tariff by the UK Government. I supported the proposals when they were first brought forward and I am very disappointed that the UK Government has made this pre-emptive strike against the scheme. The council is right to make its voice heard to the UK Government calling for a re-think of the policy. I accept that changes made by the Conservative-led UK Government make it difficult for this scheme to continue. However, we have missed out by being slightly late in the game and we need to ensure that this does not happen in the future. We need to look for new ways to maximise green renewable energy generation in the Dundee. We should not just sit back and heckle from the sidelines though; we should be calling on officers of the council to continue to look for innovative, cost-effective schemes which would encourage renewable electricity generation in our city. This would be for the benefit of all the people of Dundee, as it could deal with fuel poverty and cutting the city's carbon footprint.

I am pleased that the Administration saw sense tonight and accepted my amendment. This is a common sense way forward. This is what I was looking for and is a means of allowing me and my colleagues to put the interests of the city first, before any minor party consideration.

Labour in the House of Commons has been campaigning against the plans for changes to the feed-in tariff.
Posted by Richard McCready at 16:37 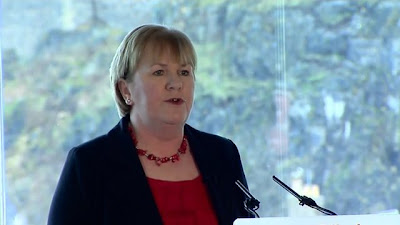 Somewhat belatedly I would like to congratulate Johann Lamont and Anas Sarwar on their elections as leader and deputy leader of the Scottish Labour Party. I am particularly pleased as I supported Johann and Anas as did Dundee West Constituency Labour Party. However, I would also say that I think that the contest has been good for the party. I think that all of the candidates have had something to offer. It seems that Johann doesn't need this advice as she has included the leadership contenders in her team, but each of them had interesting things to say about how Labour got into the position which it is in and more importantly how we can get out of this position.


I was very impressed with Johann's acceptance speech which you can see by clicking on the picture. It is clear that Labour needs to change and needs to listen to the message people gave us in May this year. I was delighted that in this morning's Courier Johann has spoken of the need for Labour to be the party of all of Scotland. We must aim to win back both Dundee City West and Dundee City East, if we want to form the government of Scotland we will have to. I am also clear that Scottish Labour should have the policies which appeal to the people of Dundee and we need to work on this.

I would offer as a starter that we should focus on fairness or social justice. Social justice is what Labour should be about. We should respect our opponents but also be clear that changing the flag flying over us will make no difference to the lives of the Scots we seek to serve. We should have as our priority making Scotland a fairer country in a fairer world. We should not get involved in a bidding war on policies; we should stick with what we think is right and argue for fairness and social justice.

I am also pleased to see Johann's Shadow Cabinet team emerging and I am delighted that my friend and colleague Jenny Marra has been given a job as the Community Safety and Legal Affairs spokesperson.

I would also like to thank Iain Gray for his service as Labour's leader. Clearly Iain's time as leader didn't end as he (or I) would have hoped but there is no doubt that he worked incredibly hard in that role. He was very supportive of me as the candidate in Dundee City West and I will always be grateful for that. I am sure that Iain will have much to offer Scottish public life in the future.
Posted by Richard McCready at 10:30