I am surprised that the meeting of the Dundee City Council which deals with police and fire issues was cancelled on Monday due to a lack of business.  I've written to Dundee City Council Chief Executive asking when the council will have an opportunity to scrutinise the budget of the police and fire services in Dundee.  The next meeting is scheduled for 21st March and may be too late to make any representations on the budget of the police or the fire service in Dundee.

I was surprised to see that the meeting of the police and fire service committee was cancelled due to lack of business to discuss.  I would have thought that Police Scotland would have been keen to outline to local councillors the vision of the new Chief Constable and how this might impact on policing in the city.  Like local government both Police Scotland and the Scottish Fire and Rescue Service are facing cuts in the next financial year.  The role of the local police and fire scrutiny committee is meant to be to influence local delivery of services.  I do not see how we can do this in any meaningful way if we are denied the opportunity to at least have a say on funding and possible cuts to services.

We have heard warm words about how both Police Scotland and the Scottish Fire and Rescue Service value the input of local councillors in the development of their policies but the most important influence on the services they provide is funding. It appears to me that Dundee City councillors will not have an opportunity to make representations about the financial plans of either organisation prior to decisions being made about their budgets for the next financial year.


There are cuts planned of £12.2 million to the Scottish Police Authority and £19.4 million to the Scottish Fire and Rescue Service; these cuts are likely to have an impact on the provision of services in Dundee.  Whilst it is for these bodies to set their budgets and priorities they claim to listen to local elected representatives and I fear that in Dundee we will not have a chance to really influence the police or fire budget.

Posted by Richard McCready at 10:44

I'm calling for a rethink from the SNP Administration on Dundee City Council over car parking in the West End.  I've been asking for action on car parking since the end of the consultation on car parking which ended in 2012.  The previous proposals for a residents' car parking scheme were rejected by local people due to cost and the lack of flexibility.  I believe that there is a need for a more flexible approach.

Local people rejected the previous proposals for a residents car parking scheme over three years ago.  I believe that this was largely on grounds of cost and the lack of flexibility in the scheme.  It was a one size-fits all scheme over a large area of the West End.

The council is consulting on parking restrictions in the West End I think that the council should revisit residents' parking in the West End.  I think that there is a scope for localised parking schemes which suit people in one street for example.  There is a problem with residents' parking in parts of the West End and the council should be looking for ways to alleviate the problem.  I am disappointed that any suggestion that they look at it has been dismissed before it has even been considered.

Everyone has to question our reliance on the car but there are clearly issues around car parking in the West End that need to be dealt with.

I am calling for the SNP Council to listen to the people of the West End and deliver car parking solutions that meet their needs.
Posted by Richard McCready at 01:09

Call for re-think over TSB closure on Perth Road

I'm calling for the TSB to rethink their decision to close the Perth Road branch of the bank.  I've ten to the Chief Executive of the TSB demanding a rethink.

A number of people have contacted me about the future of the TSB branch on the Perth Road.  I am appalled at the decision to close this branch by a bank which uses the slogan 'Local Banking for Britain' in its advertising.  It seems to me that this branch is well used and also that having banking facilities in the West End is important for the vibrancy of the Perth Road shops.

As a local resident I know how important the Perth Road shops are to local people.  I believe that having a bank amongst the mix of shops is important to promoting the shopping area and attracting footfall.  I will be meeting with the TSB  to raise my concerns and demand a rethink of this decision.

The TSB re-brand a couple of years ago was meant to signal a change - a change to local banking.  This decision makes that look like a lot of nonsense.

I want to see this decision changed and I would urge all TSB customers who use the Perth Road branch to make their views known to the bank.

Posted by Richard McCready at 00:17 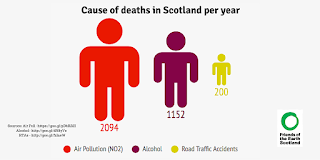 As Labour's Environment spokesperson in Dundee I am demanding action by Dundee City Council on poor air quality. I'm frustrated that year after year streets in Dundee are named in this research by Friends of the Earth Scotland.  Lochee Road and Seagate are named yet again as amongst the most polluted streets in Scotland.  Friends of the Earth Scotland claim that there are 2,000 deaths in Scotland each year as a result of poor air quality.  If these figures are even close to being correct then they must act as a call to action. 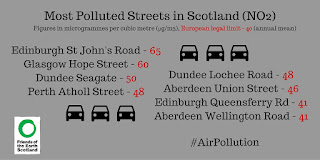 It is disappointing that yet again we find Dundee streets named amongst the most polluted in Scotland. I have raised this time and again and it is time for concerted action on this. Dundee City Council should call a summit of all interested parties and ensure that everything is being done to eradicate poor air quality in Dundee. 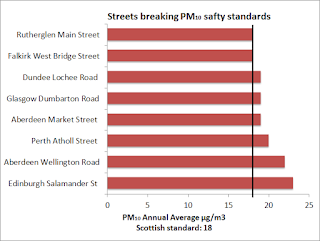 I am also calling on the Dundee Fairness Commission to look at the impact of poor air quality in Dundee.  It is important that this is looked at.

Action is needed - the health of people in Dundee relies on effective action and Dundee City Council must take a lead on this.
I know that Dundee City Council is trying to deal with this issue but it is important that there is concerted action on this aimed at finding a long-term lasting solution.
Posted by Richard McCready at 00:14