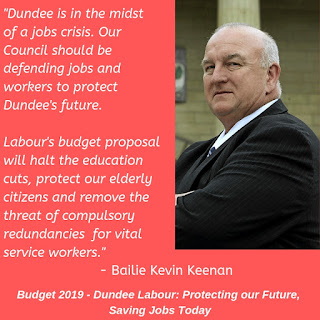 I am disappointed that our sensible proposals to protect education spending, to stop the on-going attack on the terms and conditions of council workers and to spend more on health and social care were rejected.  You can read more about our proposals here.

During the debate I spoke in favour of our proposals.

There were many disagreements during the council meeting but there is one thing that the council is still united on.  It remains the policy of Dundee City Council that Dundee needs a better settlement from the Scottish Government.  The council's lobbying has so far fallen on deaf ears.  The budget may well have been passed but we need to keep up the pressure to make sure that, at the very least, next year Dundee gets a fair deal.

Our proposals would have utilised more of the council's reserves.  This is because we are clear that this is the rainy day. There is no point in building up reserves at the same time as cutting jobs and services.

Labour's proposals would have protected a whole range of voluntary organisations such as Barnardos, Action for Children, One Parent Families and Victim Support among many, many others.  The fact that under 43 different headings in the voluntary sector there was to be a 5% cut shows that there had been very little thought about how this might impact on service delivery.  Instead there was an arbitrary cut of 5% proposed.  We tried to protect this investment, but the SNP voted through this cut.

We also wanted to spend more on Health and Social Care than the SNP.  We proposed an amount targeted at reducing hospital re-admissions and issues around trips and falls.  This would utilise social care workers more effectively and prevent any proposals for split shifts amongst these essential workers.

The SNP put forward proposals to cut funding to Dundee's cultural bodies other than the V & A.  We proposed to continue to support Dundee Heritage Trust, Dundee Science Centre, the DCA and Dundee Rep and Scottish Dance Theatre as well as the V & A.  We also proposed extra funding for Dundee Rep and Scottish Dance Theatre to allow them to do even more community work.  Given that Dundee prides itself in its cultural activities it is bizarre that these cuts were pushed through.  Remember that this council wanted to be European City of Culture in 2023.


Most importantly our proposals tried to delete all the savings in the education budget.  It is crucial that we give every young person in Dundee the best start in life.  Officers said that these cuts would impact on  the education in our schools.  Our plans would have stopped the 3% cut to school devolved budgets, it would have stopped the rise in prices for school breakfast clubs and preserved the Kick It Kick Off programme.  Our plans would have recognised and valued the work of support staff in our schools.  Instead we will have the situation where Pupil Equity Funding is used inappropriately to cover for cuts in mainstream budgets.  That was called cheating when I was at school.

Our proposals were a budget for the many not the few, a budget which would have protected the future of our city by saving jobs and services.

Posted by Richard McCready at 14:06

Last night at Dundee City Council's Policy and Resources Committee a report was presented to the committee entitled 'Managing Workforce Change'.  This report was put forward a mere three weeks after it was first raised with the trade unions and it is a thinly veiled attack on the terms and conditions of employees of Dundee City Council.

After listening carefully to the points made by four separate trade union deputations I seconded my colleague Councillor Kevin Keenan in calling for the report to be noted and for there to be meaningful discussions with the trade unions before any such report is brought back to committee.

The council often says that the workforce is the biggest resource that it has and if we truly think that we have a duty to value our workforce. It is unacceptable in my view to refuse to listen to the voice of the workers and to not value their contribution.

To some extent trade union negotiation was taking place in the council chamber last night.  Trade unions had been told, and nobody denied that this was true, that there was no point in negotiating with them as they would disagree with the proposals anyway.  This is not how to carry out negotiations and shows bad faith from the start.  It also begs the question, who sanctioned this policy?  Was it only officers or was it the administration?  In either case it also begs the question of who is in charge?

We were told last night that this was not about implementing a policy soon it was about opening up opportunities to do things differently.  Why the indecent haste to implement the policy then?  If it is not about being able to do things soon why not talk about the proposals with the trade unions..

The whole approach strikes me as counterproductive.  At the trade union demonstration on Saturday I heard about the willingness of social care workers to take strike action.  It seems to me that the council is keen on such a confrontation.  This is not in anyone's interests.

If officers and the SNP Administration are so convinced that the proposals that they put forward last night are correct what are they frightened of in discussing them further with the workforce and their trade unions.

Finally, this policy was first shown to the trade unions on 24 January and three weeks  later was debated in committee  Why the haste?  Is this to be the new norm with regard to policy development.  Frankly, for a number of issues in the West End the ability to turn around policy is closer to three years than three weeks.  Again I say, why the haste?