I welcome the move by Stagecoach to continue to provide toilet facilities at Dundee Bus Station. I am pleased that this is the case as it would have provided a terrible welcome to our city if the bus station was without toilet facilities. I think that the council needs to remember that it has a duty to promote the city at all times and things such as the facilities at the Bus Station or the rail station are important in this.

It is important that visitors to Dundee receive a warm welcome and I am glad that, thanks to Stagecoach, that will still be the case. This case demonstrates some of the problems that the council will face over the next few years. Decisions have to be made on the basis of a lack of money due to decisions taken at Holyrood and Westminster and the state of the economy and sometimes things that look like they will save money don't actually work or have unintended consequences. In this case there was an assumption that Stagecoach would pick up the bill, and they have, but in such cases there needs to be more discussions with all the parties involved. I think that this gives a very clear indication of the need for more open discussions about possible options.
Posted by Richard McCready at 00:11

Treat the Saltire with Respect

﻿﻿
Firstly, I would like to say that there are much bigger issues facing the Dundee City Council than flags but if we are going to fly flags then we need to get it right and show the appropriate respect.


If we are going to fly our National flag from council owned buildings then we need to ensure that the flag is treated with due respect. I understand that in an ideal world flags should be raised and lowered every day and allowed to dry out for example, if we are unable to do that then perhaps we should consider whether it is appropriate to continue flying that flag. We should never allow the flag to get ripped. Flying a tattered flag shows no respect. It is important that the council respects the symbols of our nation and our state and if they are unable to do so then they should seriously consider whether it is appropriate to continue to show such a lack of respect.

I think that it is good to see the Saltire flying proudly over our city and I would like to see this continue. Seeing a tattered and ripped flag flying less than proudly over our city is something I would like to see stop.
I am glad that since I have raised this issue the council has said that the Saltire will be replaced and I hope that it will now be treated with respect.
Posted by Richard McCready at 22:09 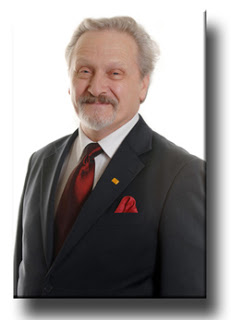 I was really saddened to hear of the death of my former colleague Bailie George Regan.  George served his city and his party well for over twenty years as a councillor.  It is a great shame that George did not get to enjoy a  long and well-deserved retirement.

George served his constituents well over the whole period of his time in office.  George served the city most notably as Finance Convener and Housing Convener.  George was also a committed supporter of Devolution and served on the national committee of the Campaign for a Scottish Parliament.  George's other passion was nuclear disarmament, he was very involved in Nuclear Free Local Authorities and the Mayor's for Peace movement.

Behind George's many political achievements it is important to remember that his family have lost a husband, father and grandfather.

George was a great help to me after my election to the council back in 2007.  I would like to thank George for his many kindnesses towards to me.

My thoughts and prayers and with George Regan and his family at this difficult time, RIP.
Posted by Richard McCready at 21:11