There is legislation going through the Scottish Parliament just now which will make changes to private tenancies, Private Housing (Tenancies) Bill.  Local people will know that private tenancies are important in the West End.  There are some contradictions in this bill.

One of the main proposals in the legislation is to make it more difficult to evict tenants.  This is something which I think is to be welcomed.  At the moment too much power rests with private landlords and people should have more security of tenure.

This legislation might make it harder for anti-social tenants to be evicted.  There are fears that frightened or intimidated neighbours might not be willing to speak out at tribunals being proposed in the Scottish Government’s Private Housing (Tenancies) Bill.

I have constituents who are already living in fear next to anti-social tenants and would not be willing to make themselves known.  There are definitely people who have spoken to me who are at the end of their tether with anti-social behaviour but they don’t want to come forward and have their neighbours know they have complained.

I hope that MSPs will be aware of this dilemma as this legislation moves through the Scottish Parliament.  It is important to ensure tenants get more power but it is also important that anti-social tenants can be dealt with effectively.

Private rented accommodation is a major part of the housing offer in the West End.  It is important that the correct checks and balances are in place to ensure to make sure tenants are protected and anti-social behaviour is not tolerated.
Posted by Richard McCready at 23:41

Opposition to the Trade Union Bill

I am proud to be a member of the GMB a trade union with a long and proud tradition of improving the lot of workers right across the country.  The Conservative Government is proposing to bring in legislation that will limit the freedoms of trade unions.  I think that people have a human right to organise in the way in which they see fit.  The government is planning to legislate to limit the freedom to organise.

I am particularly concerned about proposals that mean that check off will be banned in the public sector.  Check off is a system that allows people to pay their trade union membership from their salaries.  Public bodies actually make money out of this activity.  It is also used, rightly, to make donations to charities or pay for things like bicycles, these activities are not being targeted so it is clear that this is an attack on trade unions.

Trade union officials are sometimes given the ability to spend some time on union activity whilst at work, this is known as facility time.  This usually contributes to better industrial relations.  The proposal is to outlaw this.  There is also a proposal to allow the use of agency staff to break strike action.  Strike action is taken as a last resort and not taken lightly.  It is a human right to be able to withdraw your labour and just wrong that attempts are made to undermine that right. 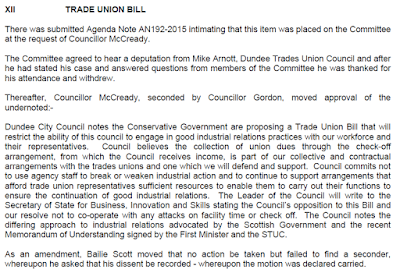 On behalf of the Labour Group on Dundee City Council I moved a motion which committed the council to oppose the bill, and to refuse to co-operate with it.  The council is committed to  maintaining check off, maintaining facility time and refusing to use agency staff to break strikes.

I was really pleased that the council spoke with near unanimity in support of my motion.  Dundee's only Conservative councillor could not bring himself to support my motion.

On behalf of the Scottish Co-operative Party I was pleased to speak against the Trade Union Bill at the Scottish Labour Party Conference in Perth at the weekend.  The main points I made are below: 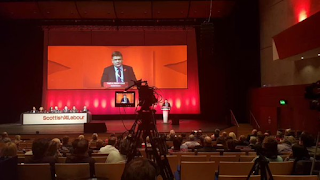 'It is clear that this bill, if passed, would lead to poorer industrial relations.  It is just plain daft.'
I was also honoured to be asked to speak at the demonstration organised as part of the STUC Women's Conference.  I made many of the points made here and highlighted the important contribution of trade unions, and in Dundee especially women trade unionists to the history of Dundee.
I support the right of people to join a trade union and to organise as they see fit and I hope that the UK Government will have a change of heart and that the campaign by trade unions is successful.
Posted by Richard McCready at 22:10