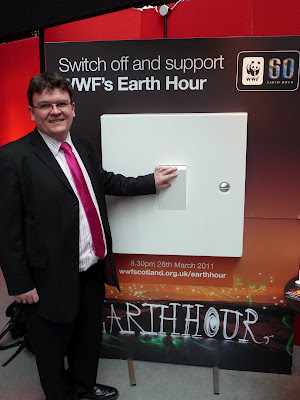 Tonight at 8.30 I am taking part in Earth Hour, I'll be turning out the lights to show my support. It is about more than just turning out your lights it is about showing that you care about the future of our planet.


WWF’s Earth Hour is a simple idea that’s quickly turned into a global phenomenon. Hundreds of millions of people turning off their lights for one hour, on the same night, all across the planet. It’s about appreciating the brilliant world we all share – and how we need to protect it. Not just for an hour a year, but every day.

Last year over 8 million people took part in the UK alone, alongside hundreds of major landmarks including Big Ben, Buckingham Palace and the iconic Piccadilly lights. And this year is set to be even bigger with landmarks across the world confirmed to join the big switch off, from the Sydney Opera House in Australia and Christ the Redeemer in Rio to the Empire State building in New York and the Eiffel Tower in France.

As Labour's Environment spokesperson in Dundee I am very aware of how important it is that we look after the environment and that all of us recognise that we can all do small things that will make a difference.
Posted by Richard McCready at 17:57

Last week there was a meeting of the Harris Academy Project Board which is looking at re-furbishing Harris Academy. There is now at long last some progress being made after several years of foot dragging. I will continue to campaign for the refurbishment of the Harris as a priority for the next council. It is important that this project is actually delivered for the good of the young people of the West End and beyond.
Posted by Richard McCready at 17:41

On Thursday I was pleased to attend the Dundee Economic Summit. This was a very important event, Dundee economy and jobs must be the top priority for everyone with Dundee's best interests at heart. There were really interesting presentations on the Waterfront Project, on the V & A at Dundee, on Michelin in Dundee, on Malmaison in Dundee.

I think that these presentations offer great hope for the city but we need to turn these hopes into reality and take action which will make a difference to people's lives. I think that the analysis was good but what we need is action. That is why Dundee Labour will establish a task force to bring jobs to Dundee. Dundee needs jobs and needs leadership who will put jobs first.
Posted by Richard McCready at 17:13

Delighted that daft idea for trains to stop at Edinburgh ditched

I am really pleased that the SNP Government has ditched the daft plan to stop trains at Edinburgh which would have meant no through trains to England from Dundee. I raised my concerns about these daft ideas when they were published and I responded to the consultation highlighting that this was a daft idea.

There are still a number of issues which need to clarified about the rest of the proposals which my colleague Richard Baker MSP has described as ludicrous. We need reassurance on the future of sleeper services which are crucial for business and tourist links. We need to know what is planned for journey times. We need to know about plans to make more passengers stand.

I am pleased that trains will travel beyond Edinburgh going to and from England and it was important that this daft idea was ditched.
Posted by Richard McCready at 11:40

On Tuesday evening I attended a meeting which effectively re-launched the Whitehall Theatre. I was very concerned when it appeared that the Whitehall Theatre might close. I was very pleased when the City Council found a way to secure the future of the Theatre at least for the next year. It is very important that over the next year that the theatre is well used and returns to being an important part of Dundee's cultural life.

The plans which I heard at last night's meeting give me confidence that this is the case and that those who are now on the trust and those from the City Council and Leisure & Culture Dundee who are working together know how to face the challenges ahead.

One of the means by which they are facing up to the challenges is through a new website and a new social media presence on facebook and twitter. If you want to know about what is going on at the theatre you can keep up-to-date through the very impressive website or through facebook and twitter.

There is also a hope that community groups in the West End, even ones not concerned with theatre, will be able to use some of the spaces at the Whitehall. Get in touch with the theatre if you are interested.

I was going to wish the Whitehall Theatre good luck for the future but I know that is considered bad luck in the theatre so, as they say 'break a leg!'
Posted by Richard McCready at 09:22

On Tuesday evening I attended a meeting of the board of Dundee Rep. This was in some ways a sad meeting as we heard about plans to replace the excellent James Brining, the Artistic Director and Chief Executive of Dundee Rep, who has announced that he is leaving to take up another post.

There are a couple of interesting shows coming up at the Rep. Scottish Dance Theatre has a show for children, called What on Earth!?, during the Easter holidays. The video here shows some action from the rehearsals. At the end of April Further than the Furthest Thing will be staged at the Rep. I am sure that both of these shows, like most at the Rep, will be well worth a visit.
Posted by Richard McCready at 23:37

This afternoon I attended a meeting of the support group at Jericho House just off South Tay Street in the West End. Jericho House is a service for men with serious alcohol problems. Jericho House has just launched a new website. It is well worth a look as this is a really good service to some of the most marginalised people in our society.
Posted by Richard McCready at 23:11

A listening council - they don't even listen to their own ministers

There was a report about the very important issue of Curriculum for Excellence (CfE) and the council's level of preparedness for its implementation in the senior phase of secondary school. This was a very interesting meeting with two head teachers brought to the committee and allowed to speak at length. Much of what they said was very useful and I look forward to the next Environment Committee for example when we might hear from gardeners or gravediggers or waste management operatives. The choreography of the meeting was most interesting with lots of questions from Administration councillors which received surprisingly detailed and well thought out answers. Questions from opposition councillors or the other statutory members of the committee were afforded no such luxury.

The most important issue here is getting it right for every young person in this city and ensuring that when they go forward for national qualifications they are well prepared and that their school and each department in that school is well prepared.

We received a report on the 16th of March which was discussed on Monday evening, I attended a very useful briefing on Curriculum for Excellence on 18th March. The Cabinet Secretary for Education issued a letter to the Scottish Parliament's Education Committee on 20th March (made public 21st March) where he outlined that he had agreed a package of support measures with the EIS on implementation of CfE. This seems to me to merit some consideration but not from the Dundee Education Department, or the SNP Administration ably assisted by the Lord Provost it was a case of heads down keep on going no matter what happens. This is, at the very least doing a dis-service to the young people of our city.

My colleague Laurie Bidwell put forward an amendment which called for the council to take on board what the Cabinet Secretary for Education said last week and called for a report to be brought back in June to satisfy the council that every school and every department in Dundee is ready for CfE.

All of us on the Education Committee want the very best for the young people of Dundee. I think that Curriculum for Excellence is on the whole a good way forward. We do need to stop and reflect for at least a moment on the concerns expressed by parents and by trade unions representing the teachers at what used to be called the chalk-face. These concerns were acknowledged by the Cabinet Secretary for Education last week but are not acknowledged by Dundee's Education Department.

We need to ensure that we work together to ensure that we do our best for the young people of our city. We should not be charging headlong in a particular direction purely on the basis that we don't want to be seen to having been listening to parents, teachers or even the Cabinet Secretary.

Laurie Bidwell's amendment sought to give parents and pupils reassurance. It may well be that CfE is the best way forward for most pupils in Dundee now but if it isn't those who pushed through the out-of-date report at last night's committee will have a moral responsibility for damaging the life chances of Dundee's young people.

I could make political capital out of the Convener saying that Mike Russell was 'misleading' parents but this is far too important an issue to making political capital out of it. I hope that the decision taken last night works out in the best interests of Dundee children, but I do wonder why the council was so convinced that it should not even take the time to review where it is.
Posted by Richard McCready at 15:03

Monday morning saw the last meeting of the Tayside Fire and Rescue Board prior to the election. The Agenda can be found here. The main item in the public section of the meeting was the presentation of the Best Value Audit of Tayside Fire and Rescue to the Board. I have previously made clear my concerns about this report. I think that there are things that the board needs to learn but I think that the report is undermined by the inherent contradiction in the report which on the one hand says that there is not enough challenge of officers and on the other hand the board was wrong not to just accept the views of the officers over the future of Balmossie Fire Station. There was a very interesting discussion about how the next Fire and Rescue Board and how it can improve its scrutiny.

There was also a report on the Towards a Safer Tayside 2012/13 consultation. I think that this is important event each year when the Fire Board looks for the views of local people on the fire service. There was an important discussion about how we can engage better with younger people in future consultations.

There will be further important news for Tayside Fire and Rescue Board later this week.
Posted by Richard McCready at 23:01