I have written to the new Justice Secretary Humza Yousaf MSP over the future of Ryehill Police Station in the West End ward.  Police Scotland have previously suggested closing the station and whilst it has gained a temporary reprieve I am looking for the new Justice Secretary to back up the new Chief Constable’s commitment to localism by committing to maintaining the police presence at Ryehill and indeed improving it.


In response to the voice of local people Ryehill Police Station received a reprieve but there has never been a long-term commitment to maintaining the police presence in the West End.  I have written to the new Justice Secretary raising this issue with him and asking that there is a new look at this.  I hope that Humza Yousaf will see the need to maintain local police resources and will support the people of the West End in their call for an effective police presence at Ryehill to serve the West End.


I welcome the new Chief Constable to his post and I note his commitment to local solutions.  I think with this in mind he should look at the need to maintain and indeed enhance the police presence at Ryehill.  I have written to him welcoming him to his new post and wishing him well in it and asking for a long-term commitment to maintaining the police station at Ryehill.


I do not just want Police Scotland to keep the station open but it is important that a public-facing service is available to the people of the West End.  I am maintaining my call not just for Police Scotland to keep ownership of Ryehill Police Station but for an improved service which regularly interacts with the public and is clearly the place where the public should make first contact with the police.  I hope that the new Cabinet Secretary for Justice and the new Chief Constable will agree with me.
Posted by Richard McCready at 13:04

Where is the City Deal?

I am concerned and frustrated about the lack of progress on the Tay Cities Deal.  I am a member of the Tay Cities Region Joint committee and  I was surprised to learn that the meeting that was scheduled for 24th August was cancelled.


I am happy to be a member of the Tay Cities Region Joint Committee it is a good example of politicians working together across party and geographical boundaries with other partners in the interests of people in our area.  I want to see progress on the Tay Cities Deal and I want to see investment in our city and region.  I was surprised to learn that the meeting of the committee scheduled for 24th August was cancelled and a meeting is now scheduled for September.

We need to see progress on the deal.  This is not good enough.  In recent weeks we have seen the unedifying sight of both the UK and Scottish Governments engaging in a pointless blame game before the deal is even published.  UK and Scottish ministers might enjoy their political games but I am looking for the Tay Cities Deal to invest in jobs for Dundee.  Jobs for Dundee is what I want to see.  We need action rather than posturing and we need a deal which benefits the people of Dundee and the wider Tay Cities region.


I hope that by the time the committee eventually meets that there is something positive to report about Tay Cities Deal.  We have been waiting too long for this, we need action and we need to get it right for the people of Dundee.  I am looking for a deal which delivers jobs and investment for Dundee and the surrounding area and which makes a real difference.

My colleague Councillor Kevin Keenan first called for a city deal for Dundee back in 2013 I fear that we have missed the boat with the delays and prevarication since then.  I am clear that our priority has to be jobs for the people of Dundee.

Over the summer I have called on Dundee City Council to set up a task force to combat the situation which happens every summer where large amount of furniture and household goods are dumped in the summer months around the West End as tenancies come to an end in private rented flats.

Every year I get lots of complaints in June, July and August about items of furniture which have been dumped often when tenancies come to an end.  As a local resident I see these items of furniture around the West End.  I have spoken to officers in the Environment Section of Dundee City Council and asked that they look at ways of dealing with this.  I have suggested a task force which is charged with proactively dealing with the problem.  I am clear that there should be no amnesty for people who are responsible for items being dumped and that tenants and landlords should act responsibly and dispose of goods in a responsible fashion.

I am clear though that the people of the West End should not have to put up with excessive amounts of dumped furniture littering our streets.  We need to catch culprits and we need people to behave responsibly but we also need not to punish the rest of the community for the irresponsible actions of a few.  I am pleased to say that I have been told that my idea will be included in a review of the work of the Environment Section and I hope that it will make a difference to  the quality of life of the people of the West End.
Posted by Richard McCready at 12:38 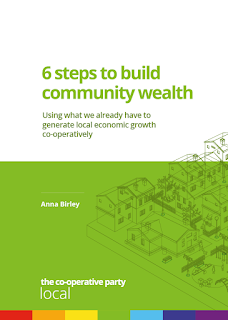 I am calling on Dundee City Council to use its economic power to promote community wealth building and ensure that investment by the city council and other public bodies in the city benefits the people of Dundee.

This is an exciting year for Dundee, we are seeing some very important developments come to fruition.  It is disappointing that the people of Dundee have not received the maximum benefit which they could have from these investments, the contracts goes to large businesses with little staying in the local economy.


I want Dundee City Council to look at what has been done elsewhere in places like Cleveland in the USA and Preston in England.  In those cities the city council decided that they should use their economic clout to make a difference to their communities.  Instead of outsourcing profits and jobs consideration was given as to how money could be kept in the local economy.

In some respects this is about how contracts are let, making sure that local companies can compete by not making the contracts so big that only multi-national companies can apply for them.  It is about employing local people where possible and about buying from local suppliers where possible.  Often when a business in Dundee goes bust politicians line up to wring their hands and say how terrible it is whilst at the same time supporting a system which stops the local council from spending money locally as the default situation.

This so-called ‘Preston Model’ has been attracting interest and I have written to the City Council Chief Executive asking that he might look at ways in which the policy of the council could be changed to build local wealth.  John McDonnell MP has committed a future Labour Government to working on this agenda.  You can read more about this in the Co-operative Party pamphlet about it.

Posted by Richard McCready at 12:34