The results of the Scottish election are obviously very disappointing to me. As I said to the Dundee Courier after the result was announced in Dundee City West I've had better nights. As I did at the count I offer my congratulations to Joe FitzPatrick, it was the SNP's night and they deserve to enjoy their victory.

Labour will have to re-group in Scotland and in Dundee and as a member of the City Council I intend to play my part in that. 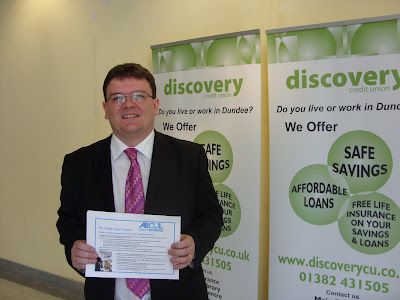 As a Scottish Labour and Co-operative candidate I was really pleased to see that Labour produced a Co-operatives and Mutuals Manifesto.

The photograph here shows me supporting the Credit Union Charter produced by ABCUL.

From credit unions to supporter owned football clubs I think we should be looking at doing things differently.
Posted by Richard McCready at 11:07

Over the last few weeks I have been busy knocking doors right across Dundee City West, one thing is clear to me, jobs are the top priority for the city. If I am elected on Thursday I will fight every day for jobs for Dundee, to keep jobs in Dundee and to bring jobs to Dundee. This is the focus of Labour's campaign. In our election video we make clear that we are fighting for hard-working families in Dundee.

Please take a look at our video some of which was shot in Dundee. Iain Gray can be seen meeting with apprentices training at Dundee College and also visiting Dundee University, you might just get a glimpse of me if you are watching closely.
Posted by Richard McCready at 10:55