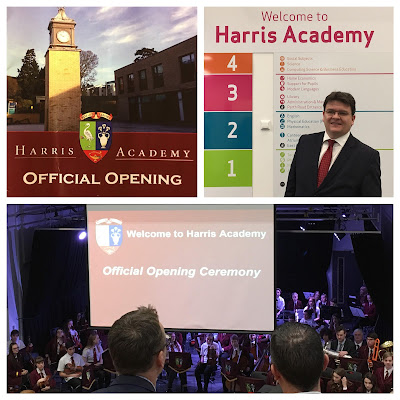 I was pleased to join pupils and staff at Harris Academy today for the Official Re-opening.  John Swinney carried out the official opening.

It was a very enjoyable event and the pupils used the event to show off their skills.  There were great musical performances, multi-visual presentations and baking!


This was a very positive day for Harris Academy. I am sure that its enhanced buildings and facilities will help promote a wider range of learning opportunities for all of its pupils. It is clear that Councillors made the right decision to rebulid the school from scratch rather than refurbish the existing buildings from the 1930's and 1960's.

I am pleased as one of the local councillors to have played my part in delivering a new school for Harris.  There have been teething issues.  I look forward to working with the school and the council to deliver the best school possible for the young people at Harris Academy.

I was pleased to be at the event with among others my colleague Councillor Laurie Bidwell.  Laurie commented as below,
"The facilities of the new school are very impressive. I am sure that staff and pupils who worked through the three year decant to Rockwell will be relieved to be back on the Perth Road enjoying their impressive new school buildings. My only regret is that, from the feasibility study that I instructed in my time as Education Convener which was completed by April 2009, it has taken seven years to realise our ambitions for a new Harris Academy."

I would like to wish all the pupils and staff of Harris Academy all the very best in their new school.
Posted by Richard McCready at 00:37