Audit Scotland has published a Best Value Audit of Tayside Fire and Rescue. You can read Audit Scotland's press release about the report here. The report draws attention to a number of important areas, it suggests that the Board made the wrong decision with regard to Balmossie Fire Station, whilst at the same time also suggesting that the board does not challenge the officers enough.

As a member of Tayside Fire and Rescue Board I would respond as below.

Firstly, I would say that I believe that Tayside Fire and Rescue Service provides an excellent service to the people of Tayside and that this is due to good work by senior officers, firefighters and support staff.

I welcome the publication of this report, I think that it is important that elected members do listen to external voices about the operation of councils and joint boards. There are important points to take on board in this report, although I would also say that there are flaws in this report which would call into question the usefulness of the report.

I would, on the whole, agree that there is not a strong enough culture of scrutiny or challenge of the service within the board. Senior officers must be open to scrutiny. In the new structures which come about as a result of moves towards a single Fire and Rescue service it is important that the governance structures are clearly more than a rubber-stamp.

I am prepared to accept some of the criticism of the work of the board but it is at best surprising that after saying that there should be more challenge of officers that the board are then criticised for the one major occasion where the board diverged from the officers recommendations. The officers of Tayside Fire and Rescue did not convince the public of Tayside or the majority of members of the Fire Board that the proposed changes to Balmossie Fire Station were the correct way forward. It is just plain wrong to consult the public and then totally ignore the responses given. I accept that board members need to balance the responses which we receive. In the case of Balmossie it is clear that on both occasions there was a campaign against the changes and that the Fire Brigades Union was involved in that campaign. I am frankly shocked by the content of paragraph 24 of the report. It seems to suggest that because the FBU was involved in encouraging people to respond to the consultation that all opposition is invalid. There are between two and three hundred FBU members in Dundee, there were thousands of people who took the time to register their opposition. The report states that the 'vast majority' of responses were from FBU members. If the report is so wrong on this matter can we take the rest of it seriously? How credible is the audit when it got this so wrong? To suggest that board members should not listen to the views of trade unions is astonishing. It smacks of a tin-pot dictatorship that we should ignore the views of people because a trade union might have been involved, however tangentially, in encouraging them to make their views known. Even if it were the case that the vast majority of responses were from a trade union is Audit Scotland seriously suggesting that the board should ignore these responses and limit the civil liberties of trade unions and trade unionists?

With regard to Balmossie it should be remembered that on both occasions when the proposals were rejected there was broad cross-party support for rejecting the proposals. It might have been more appropriate to question what message it sends when a proposal is defeated that an identical proposal is brought again the following year. It would seem to question whether there is a belief that the board sets the strategy or not.

There is much to consider in this report but it does seem to have a major contradiction at its heart.

You can see a report from STV News Tayside which includes me giving my views here.
Posted by Richard McCready at 15:21

On Tuesday evening I attended the first meeting of the year of Community Spirit. Community Spirit does an excellent job of representing the interests of residents in the northern part of the West End ward in the areas around Pentland, Tullideph, Ancrum and Cleghorn.

At tonight's meeting we heard about plans, which I have been campaigning for, to upgrade Blackness Library to improve access and ensure that there is increased community use of this building. There was also a presentation on the work of Sustrans. There are a number of areas in the West End which would benefit from the sort of work Sustrans are doing in Fife. Sustrans are hoping to work for ways to improve the environment in some residential areas.

It was also good to listen to the concerns of local people at tonight's meeting.
Posted by Richard McCready at 23:56

Friary to be re-opened as City Church Dundee 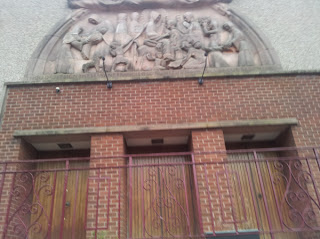 Today I was lucky enough to meet with Craig Stocks of City Church Dundee to discuss their plans for the Friary in Tullideph Road. I am really pleased that the church will be brought back into use. I was worried that the site would remain unused and that this would lead to the buildings being vandalised. I was very disappointed when the Friary closed in 2010. I hope that there is new life brought into this part of the West End ward by this development.

City Church Dundee have plans to bring a vibrant programme of events, not just worship, back to the church and complex. I would like to wish them all the very best in this.
Posted by Richard McCready at 23:22

I was really pleased to visit Deaf Links today. It was great to learn about the work of Deaf Links. Councillors, and all politicians, must try and keep up to date with the issues which impact on the lives of their constituents, one issue which faces many constituents is deafness and hearing loss. Deaf Links are based alongside the Tayside Deaf Hub in the former Tayworks Jute Mill and this looks like a good facility in the West End ward. I would like to wish Deaf Links all the very best for the future. I am happy to make appropriate arrangements for any deaf or hearing impaired constituent who wants to raise issues with me.
Posted by Richard McCready at 22:12

On Monday morning I was at a meeting of Tayside Fire and Rescue Board. You can see the agenda here. The main item was the budget for 2012/13. I asked a number of questions about the staff costs assumptions on which the budget is based these are found in section 3.1 of the report. There is an assumption that there will be no increase in pay either for firefighters or support staff although the negotiations have not yet been completed.

The Quarterly Activity Report highlighted a lot of work being done by Tayside Fire & Rescue. There was a lot in information about the works which are on-going towards the establishment of a Single Fire and Rescue Service in Scotland. I congratulated the service on the on-going improvements in dealing with problems around Bonfire Night. This is a result of good partnership working, even across Tayside the partnerships are different between Dundee, Perth City, Perth & Kinross and Angus. It takes local knowledge to develop these partnerships, it is crucial that issues such as this are at the forefront of the thoughts of those who are developing the new single fire service. How will local knowledge be factored in?
Posted by Richard McCready at 23:33

This morning I attended a meeting of Tayside Police Joint Board. You can see the agenda here. There was much discussion on some of the issues which face the police service as the Scottish Government moves towards a single national police force. We also set the budget for Tayside Police for 2012/13. In light of recent reports I asked about the use of police officers to do tasks which have previously been undertaken by police staff. I favour keeping police officer numbers up but it is not right that highly trained and resourced police officers should be utilised in roles where there is no need to be a police officer. One of the main trade unions representing police staff Unison has raised concerns about threats to the number of police staff and whether this is having an impact on the deployment of police officers. My colleague Jenny Marra MSP has raised her concerns about this as Scottish Labour Community spokesperson. I was told that there is only one post in Tayside which has been permanently filled by a police officer having previously been filled by a member of police staff.

There was a report on how Tayside Police are dealing with 999 calls and non-emergency calls. Tayside's response rate is below the Scottish average. I made the point that whilst we need take speed of response seriously it is important also that calls are dealt with appropriately.

I was very interested to see from the Operational Policing report that efforts are being made to deal with the trafficking of drugs through Dundee Railway Station. I hope that the partnerships between Tayside Police and British Transport Police continue to protect the community in Dundee and all users of Dundee Station. I was also interested to read about Operation Matterhorn which is dealing with the supply of drugs in Lochee and Charleston and surrounding areas. This is an important issue which needs to be dealt with and which has an impact on my ward. I know that my colleague Councillor Tom Ferguson is working very hard to deal with such issues.
Posted by Richard McCready at 22:15