Da Vinci Drawings at the McManus


I recently visited the exhibition of ten drawings by Leonardo da Vinci at the McManus Galleries. These are drawings are remarkable in their detail and it is interesting to have some idea of the how he used these drawings in preparation for paintings or for his scientific research. It is interesting to note that Da Vinci paintings were exhibited in Dundee as far back as 1867 at the conference of the British Association for the Advancement of Science.﻿﻿﻿


It is great for this exhibition to be in Dundee and for the exhibition to be free of charge. Dundee is building an excellent reputation as a centre for cultural excellence. I think that this is the sort of exhibition along with the events and exhibitions which are indigenous to the city make the case for Dundee to be the UK City of Culture in 2017.
﻿﻿﻿﻿﻿﻿﻿﻿﻿﻿﻿﻿﻿﻿
﻿﻿The exhibition continues until 4th November and is well worth a visit.  I can also thoroughly recommend a visit to the rest of the McManus which offers lots on the Dundee's history and cultural heritage.

Posted by Richard McCready at 00:54

I was delighted to visit the two new exhibits at DCA.  There are currently two exhibits, one by DashnDem entitled Imagine Being a World Leader and the second by Nikolaj Bendix Skyum Larsen entitled From the Edge.

﻿﻿﻿﻿﻿﻿ Imagine Being a World Leader is an exhibition which examines the ways in which politicians communicate with their electorates.  I certainly took some notes!  It is a fun but still thought provoking exhibit.  I was pleased to see how Blackness Primary had been involved in this project and it was good to see the young people taking part and growing in their understanding of how politics works.  There are elements of this exhibit which make politics seem like a game and it can sometimes appear like this, I hope that this is not the case as politics does deal with important issues.  This autumn sees the US Presidential Election Campaign and it is interesting to visit this exhibition and then watch the media coverage of the campaign.

﻿﻿﻿﻿ I found the other exhibit particularly interesting. As some readers will know my PhD research was on Irish migration to Scotland in the nineteenth century.  From the Edge looks at issues around immigration and diaspora communities.  I was particularly moved by the piece called Rendezvous which looks at the lives of migrant Indian workers in Dubai and their families in Kerala in India.  This shows in my view the sacrifices which migrant workers make in order to support their families.  Migrants are often seen as an easy scapegoat for problems in our society.  As I said the other week after the Dundee Together event immigration can sometimes be good for society.  Our city is the product of immigration and we should reflect on the lives of those people who came here from the nineteenth century onwards, it would be interesting to consider that legacy whilst visiting this exhibition.

The exhibitions continues at the DCA until 18 November.

Posted by Richard McCready at 22:57 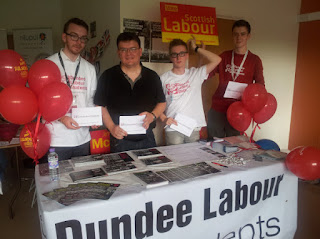 On Saturday I made a vain attempt to re-live my youth by attending the Freshers' Fayre in DUSA at the University of Dundee.   I was there to help Dundee University Labour Students at their stall at the freshers' fayre.  It was good fun, meeting a lot of young people in their first week in Dundee.  It made me think about my first few weeks at uni in Dundee.  I hope that all new and returning students have a great time here in Dundee and I hope that they enjoy their time at Dundee University as much as I did.


As the local councillor for Dundee University I am happy to hear from Dundee student about any concerns that you might have about life here in Dundee.
Posted by Richard McCready at 01:23