Free Wi-fi for the people

At the City Development Committee this week there was a report about delivering a strong free Wi-Fi system in the Waterfront. I recognise that there is a need for this development and I welcome it.  We also need to ensure that free Wi-Fi is available in the city centre and in the district shopping areas such as the Perth Road.

We also need to ensure that free Wi-Fi is available across the city.  There are great computing facilities as well as free Wi-Fi in our network of community libraries.  The libraries are not open all the time, though.  Given that what is wrongly called Welfare Reform is impacting on people across the city and that people are made to account for their activity online we should look at making sure that all the communities of Dundee have access to good quality free Wi-Fi.  Why not aim to be the most connected city in Scotland and have the most extensive free Wi-Fi network.

It is all very well offering free Wi-Fi to shoppers and tourists but all the people of Dundee including those living in areas of deprivation should benefit from this sort infrastructure as well as the many tourists that we hope will come to Dundee.  I would like to see free Wi-Fi as a benefit to all Dundonians, it should be available for the many not just the few visiting the city.
Posted by Richard McCready at 17:18

Time for the People's Bus

The People's Bus from West End Labour & Co-op on Vimeo. 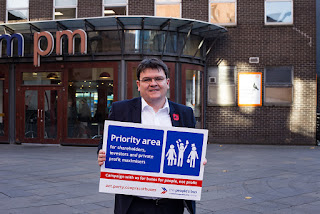 At Monday evening's City Development Committee there was a report which considered the council's response to Transport Scotland's consultation on the future of the bus industry. The legacy of bus deregulation from the 1980s is heard everytime a constituent complains to councillors about the bus service in their area.


I welcome the fact that the Scottish Government have undertaken to look at the future of the bus industry and legislate in the near future.

I have been campaigning on these issues for some time now.  The video at the top of the page is from earlier in the year and deals with some of the issues around buses which people in the West End have raised with me.


I think that we should be clear that the council’s inability to direct bus operators is a disgrace.  A disgrace given the level of support that the council gives to bus services in Dundee.  Maintaining bus stops, promoting bus use.  Yet we have little or no say over how the buses are run.  At present when we are consulted on changes to bus services, it is really about giving the council notice of things that are happening, rather than giving us the chance to influence a decision.

Two clicks from the Dundee City Council website gets you to the websites of commercial bus operators.  I am not aware of other commercial bodies which the council facilitates in such a way.


I welcome the City Council’s response to the consultation.  We need effective partnerships with bus companies.  I would welcome local franchising, this is how the bus service runs in London and whilst it is not without its problems, it is an effective network.  I strongly welcome the chance for the council to directly run services.


Sharing data is hugely important to allow us to deliver the best service possible for the people of Dundee.

Posted by Richard McCready at 00:27 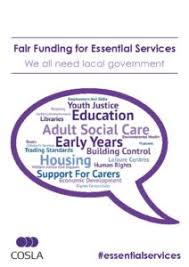 On Monday night at the council's Policy & Resources Committee there was an item setting out where the council is in terms of budgets.  The UK Budget was announced last month and the Scottish Budget will be announced in Holyrood on Thursday of this week.

The report  produced by the council's Executive Director of Corporate Services suggests that over the next three years the council may need to cut as much as £70 million from our budgets.  This is a frightening prospect, this would have an impact, as previous cuts already have had, on people right across Dundee and on the health of the economy of our city.

The Conservative Group put forward an amendment which laid the blame for the financial situation at the door of the SNP Scottish Government.

On behalf of the Labour Group I made clear that we would be looking to work with anyone to protect jobs and services in Dundee.  Comment was made last night that the Conservative amendment was merely designed to embarrass the SNP.  I do hope that the Conservatives were not just trying to embarrass the SNP and I also hope that the SNP's biggest issue is not to avoid being embarrassed.  I made the point that this is much more important than petty point scoring.  Decisions made at the Budget in Dundee City Council have a real impact on the lives of real people in Dundee.  This is far too important to play games with.  All of us who are councillors have a duty to do what we can to deliver the best outcome to the people of Dundee.

The Leader of the Council said that he had already made representations to the Cabinet Secretary for Finance about the deal for Dundee.  I welcomed that and asked that he, in the spirit of openness and transparency, share the representations he has made.

The Labour Group is clear that we will work to achieve the best outcome for our city, we will work with other parties on the council and outwith the Council Chamber with trade unions and the communities of Dundee to deliver the best deal we can aimed at protecting jobs and services.

It is ironic, of course, that the Scottish Government has so-far refused to use the full powers of the Scottish Parliament to provide more resources for local government yet it is the same Scottish Government which complains about councils who didn't use their full powers to raise the Council Tax by 3% last year.  Those councils who didn't use their full powers include the then SNP-majority-led Dundee City Council who pushed through a 2.5% increase despite there being a proposal from Labour to increase the Council Tax by 3%.

I am clear, as are my Labour colleagues, that we were elected to deliver the best services we can for the people of Dundee.  That is out priority.  We are not mere pawns in political game of chess.  Our duty is to do what we think is best for Dundee not what we think will please our political parties or go down well at a party meeting .

Labour is up for the challenge and we hope that all other councillors are as well.
Posted by Richard McCready at 11:23