One hundred years ago today using a gold key the Lord Provost of Dundee Sir William Don formally opened the Logie Housing Estate.  He declared that these houses  were 'little castles, superior in many ways and equipped in a manner ahead of many larger and more highly rented houses.' The Logie Estate he said was a 'veritable garden city' which was 'outside, and at the same time in close proximity to the city.'  The then Lord Provost said that the scheme 'departed from the orthodox path of political economy' he also said he was disappointed that private enterprise had not delivered such houses for the people of Dundee.

I know that there will be a number of celebrations of the history of the scheme once some form of normality returns.  I think though that all of us today are challenged to think differently what are we going to do to make a real difference today.

Some of the things reported in the papers around the opening of the estate have changed now, Logie is very much in the city these days.  One thing that has not changed is the inability of private enterprise to adequately house everyone in society.

When you look at the picture from the opening another difference that you see is that councillors do not have such fancy headgear these days, or at least this one doesn't. 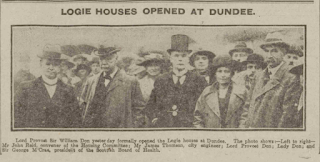 It is disappointing that the coronavirus has meant that we are unable to mark the centenary of the Logie Estate in an appropriate manner.  I am proud to represent the oldest council housing scheme in Scotland.  I want the council to look for ways to mark the centenary of the estate once we are able to.  I also want to see the council make sure that those houses which are still owned by the council are invested in and make sure that they are fit for the next hundred years.

Our predecessors at the end of the First World War had the foresight to plan for a better future.  Building the first council housing estate in Scotland was a remarkable achievement. The estate was built in the aftermath of the First World War with some impressive innovations such as a district heating system.

The work from one hundred years ago is a challenge to Dundee today.  We need think about how we will take forward policies today which are as innovative and as ambitious as the policies which led to the Logie Estate being developed in the years after the First World War.  I think that we need to look for ways to develop a new vision for council housing in Dundee which delivers new high-quality housing for people in Dundee.  The district heating system installed in 1920 also demonstrates that we need to develop new, innovative and sustainable ways of heating and powering our houses and that the council should play a leading role in that in Dundee and elsewhere.

The people who came up with the idea for the Logie Estate did so at a time of national and international crisis.  We need to match their ambition for our city and say that even in the midst of a crisis we are going to make our city a better place.

I am looking forward to being able to start holding my regular surgeries in the Logie estate at Lime Street before too long.  If you are interested in the history of this please follow the monthly blogs by Dundee City Archives. 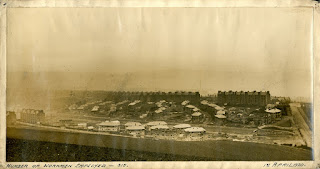 Posted by Richard McCready at 17:52