Police Use of Social Media

I think that Tayside Police do a great job in the ways in which they use social media. It is important that the police effectively communicate with the people they serve. Social media can play an important role in this.

I was disappointed to see that some people are misusing  Tayside Police's Facebook page by spreading malicious rumours and falsehoods on the page.  People need to have confidence in information which appears to come from the police. There will be times when the police need to ensure that information is passed on. I am concerned that a situation is created akin to the old story about 'crying wolf.'

There is a need for greater moderation of posts on these sights and people need to take responsibility and act properly online, as elsewhere.

I would be very unhappy if the actions of a few people caused Tayside Police to engage less. Adapting to use new media is important for all public services, including the police. There are challenges in this but public bodies need to find ways around these challenges and deliver services fit for the twenty-first  century.

Posted by Richard McCready at 23:07

Along with council officers and ward colleagues I took part in a walkabout in the Logie Estate. It was a shame that there were no local residents present. I am always happy to take up any issue from constituents in the Logie estate.

Posted by Richard McCready at 13:22

Community Spirit have done an excellent job of making the views of people in the Pentland and Ancrum areas known about the poor bus service.

I am clear that what is required is greater regulation.  Bus companies must offer a service it is not good enough for them to merely cherry-pick profitable services.

To find out more about Community Spirit click here.

Posted by Richard McCready at 15:29

Along with ward colleagues, council officers and most importantly local residents I took part in a walkabout in the Pentland estate this morning.  This is a chance to highlight to problems to council officials.

The main issues today were the state of some of the steps throughout the scheme and grass cutting on the verges. The council needs to tell people what they can expect with regard to grass cutting and stick to it.  There is to some road resurfacing in the area before the end of the month which hopefully will deal with some of the issues to do with potholes.

The photograph shows some of the problems with the overgrowing verge or banking.

If you have any queries about any issue in this area please get in touch with me. 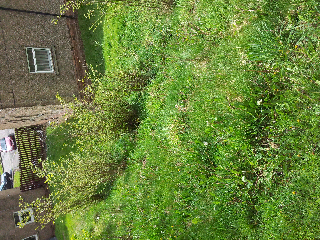 Posted by Richard McCready at 15:35

Tonight saw the last meeting for this session of the City Council and its various committees. The meeting started with those who have chosen not to come back making their valedictory speeches. I was sorry that my colleague Bailie George Regan was not able to attend, but it is important to remember George's years of service to the people of Dundee and the Labour Party.

My ward colleague Jim Barrie is also standing down, whilst I do not agree with Jim politically it has been good to work with him over the last five years.  As a local resident I have always thought that Jim has the best interests of the West End at heart.  The SNP candidates to replace him face an uphill task in being as good local candidates as Jim , not least because unlike Jim they are not local residents.

At the Environment Committee I sought a reassurance that constituents are safe from the possibility of gas problems caused by Riverside Landfill site.  I was pleased that the officers were able to offer some reassurance on this issue.

I welcome investment in the Howff Graveyard, this is an important historic landmark in the city and it is should be protected.

I spoke about the continuation of the scambusters team.  There is a review of the funding arrangements for this important service.  I highlighted how constituents had highlighted how they had been impressed by the Scambusters Service.  They do  a great job helping people be aware scams, there is also a lot of work to be done against loan sharks and even 'legal loan sharks' in my opinion.  I was pleased to be given an assurance that this service will be maintained.

At the Policy and Resources Committee I spoke about the proposed new concourse at Dundee Rail Station.  I welcome the proposals for the rail station, there is a real need for the investment.  I hope that the people of Dundee will get involved in the formal planning process which will be brought forward now.  It is important that they make their views known about the design, just as they did for the V & A.

It doesn't seem like five years since I was first elected to the City Council; I hope that the people of the West End will re-elect me on May 3rd.
Posted by Richard McCready at 00:13 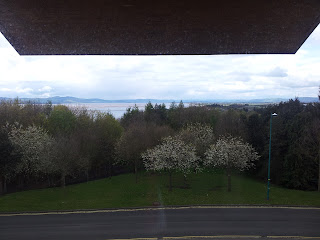 I know how devastating cancer can be to those diagnosed and their families.  It is important that people can get help and support when they need it and the Maggie's Centre offers this help.

The Frank Gehry building is fabulous and well worth seeing.  The picture shows the view from the building down the Tay.

Maggie's Centre is not supported by the government, it is not part of the NHS, it is a separate charity and is well worth support.  You can read about fundraising efforts here.

The Maggie's Centre is a fantastic place doing such a good job for people at a pretty desperate time.
Posted by Richard McCready at 23:11