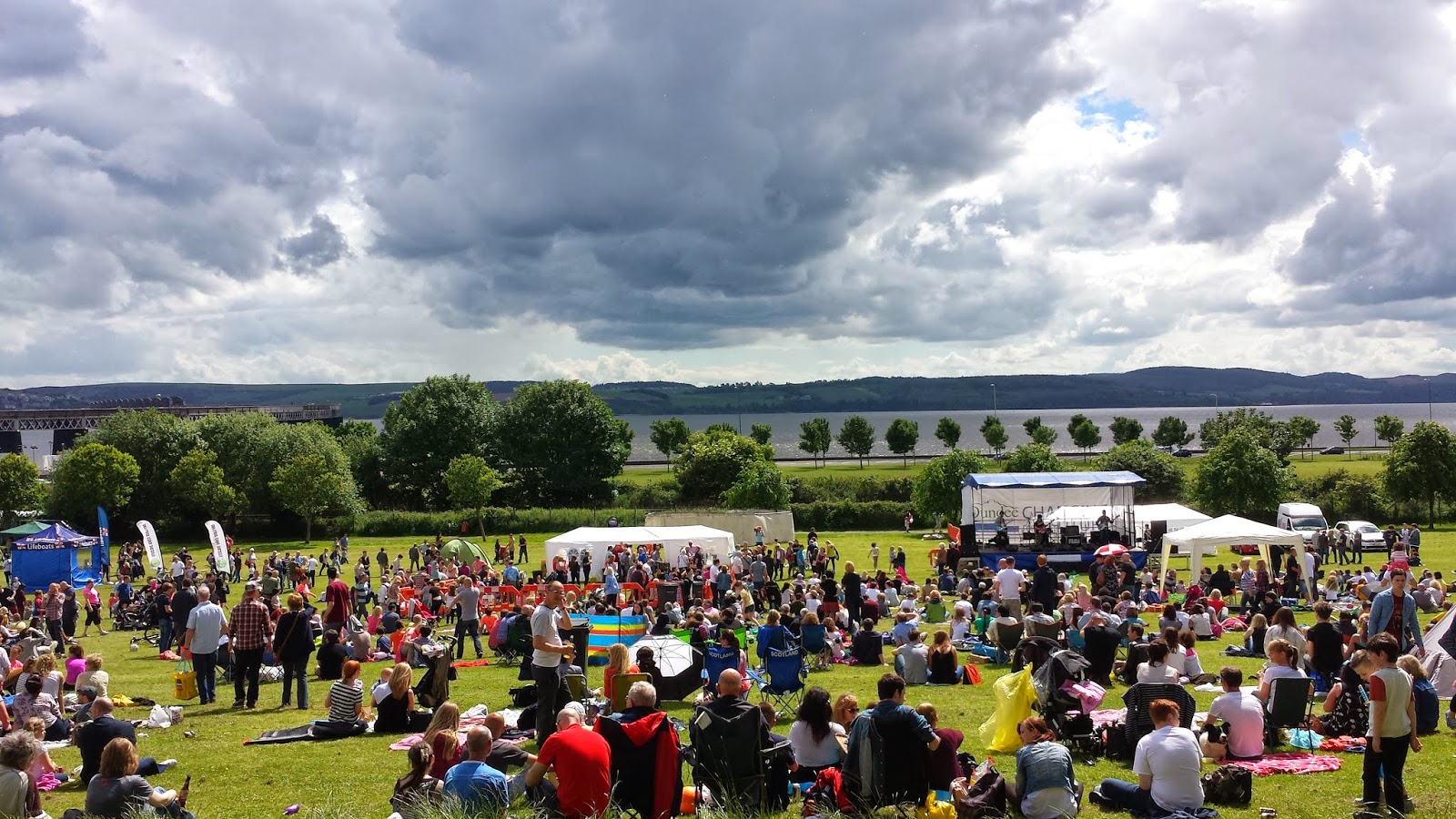 I was appalled to read in this morning's Courier that there had been vandalism and thefts at WestFest.  I was at WestFest on Sunday and it was a great day.  Everyone was having fun and enjoying themselves.  It is disgraceful that the organisers were subjected to any form of abuse.  Those responsible should be ashamed of themselves. I hope that they do not spoil this great event for everyone else.

The organisers of WestFest do a great job and they deserve praise rather than abuse.  WestFest is a great community event organised by a hard-working group of volunteers.  As a West End resident I want to thank them for their hard work.
Posted by Richard McCready at 18:09

On Tuesday night I attended the June meeting of the West End Community Council.  The main item was a presentation on the changes to bin collections in the city.  The presentation was very interesting and made clear the need to change and improve the recycling record of the city.

As with everything the devil will be in the detail.  I maintain that the efforts that are now starting to inform and consult with the public should have happened in advance of the final decision being made and not after it.  The presentation was in quite general terms and it is important that the next stage of the consultation gives people the actual details of what will happen at their property.

In the West End, and elsewhere in the city, the biggest issue around recycling is about how to deal with tenements and other flats.  This will be a major challenge.  It is important that a great effort is made to ensure that recycling is made available to people who live in flats.

I hope that Dundee improves its recycling record and it is important that the council's communication and consultation gets it right and makes sure that people understand the scheme and have bought into it.  Much of the West End (including where I live) will be in the first phase of the new recycling scheme.  I'll be keeping a close eye on this and ensuring that the council listens to the concerns of local people.

Posted by Richard McCready at 09:37

I want to start by saying that I know that tenants in the West End greatly value the service they receive in Sheltered Housing.  I know that wardens do a great job supporting older people and often go the extra mile for them.

The Sheltered Housing Review has acquired almost mythical qualities, everyone had heard of it we were just unsure whether it actually existed or not.  Even SNP councillor Jimmy Black admitted that it had moved at a 'snail's pace'.  This has been a major concern to me, the length of time which this review has taken has only added to the concerns felt by tenants and staff and has not been good for anyone.

I welcome the fact that the report was brought forward but I cannot understand how the report could not even mention the Care Inspectorate inspection which took place on 21st February of this year.  The Care Inspectorate have published a draft copy of that report by mistake, but it was widely reported in the media that the report was not good.  It beggar's belief that we were asked to rush through a report, which has taken far too long to produce in any case, without any reference to a report which is likely to be published soon and which may well be critical of the service.  There has been no hurry over the last three years why is there a hurry now?

It is just odd that a service receives an inspection and then makes no reference to that inspection whilst proposing major changes to the service.  I was very disappointed that the Convener was so dismissive of genuine concerns.

I am particularly concerned that the overall impact of Sheltered Housing has not been considered in this report.  Sheltered Housing and the regulations around it clearly cause the leadership of the council problems but we should have been looking at a much bigger picture. The Christie Commission said that we should be looking at the overall costs to the public purse.  I am convinced that the work of Sheltered Wardens keeps older people living in their own homes in the community for longer than may otherwise have been the case.  The alternative care settings cost an awful lot more than Sheltered Housing and often do not have the same beneficial outcomes.  I hope that the council did not push through a policy that will be detrimental to the care of older people in our city.
Posted by Richard McCready at 16:35

I was also happy to join my colleague Kevin Keenan in calling for none of the £18,000 being made available today to be spent on alcohol.  We were accused of being 'puritans' as a result of this but I think that it is important that we recognise the damage that Scotland's poor relationship with alcohol does to our city and our country.  I think that we need to change the culture in our country and make the case the you can have a good time and celebrate major occasions without recourse to alcohol.

The £18,000 is welcome but it is clear to me that people in Dundee need to use this money and look at ways of developing Hogmanay celebrations.  I want any celebrations to have a focus on being family friendly.  It will be interesting to see what proposals come forward.
Posted by Richard McCready at 23:41

I was delighted to be present with so many local people at WestFest's Big Sunday on Magdalen Green this afternoon.  It was a great day and I am sure that people enjoyed themselves despite the occasional shower.

WestFest has certainly come a long way since we had a meeting in Blackness Library back in 2009.  The hardworking committee do a power of work.  I would like to thank the committee for their work.
Posted by Richard McCready at 23:23


Dundee City Council recently published the expenses return for councillors for 2013/14.  You can see the returns here.  I receive the basic pay for a councillor, this figure is decided upon nationally and I have no influence over what I am paid.  The council gives me a mobile phone which cost just over £200 in 2013/14.  The council pays this directly and I received no money for my mobile phone expenses.

I am happy to answer any questions which constituents may have on my expenses.
Posted by Richard McCready at 22:43