I welcome the news that Dundee City Council is to respond to the UK Government's Department of Culture, Media and Sport consultation on the implementation of tax relief for the Games Industry.
I felt that it was important that the City Council made the case to support and protect jobs in Dundee and hopefully to bring new jobs to Dundee.  I am pleased to say that the Chief Executive has responded speedily to my request and he has agreed that the City Council should be making a response to the consultation.  I think that this industry is important to the future economic viability of the city and we should be doing all that we can to ensure that it can compete in the global market.
It is a shame that it has taken so long and that time has been lost since the previous Labour Government said it would implement tax relief for the Games Industry.  It is essential now that genuine progress is made and that the tax relief scheme is up and running before too long.
Posted by Richard McCready at 14:56

Council Should Make Voice Heard in Support of Games Industry

I have written to the council's Chief Executive asking that the council responds to this consultation and I am looking forward to receiving his response.
Posted by Richard McCready at 23:35

Progress on the Living Wage

I was sad to hear of the death of the historian Eric Hobsbawm today. I have read a great deal of Hobsbawm's historical writing both as an undergraduate and in my research for my PhD.  Hobsbawm lived a remarkable and long life.  He was active in opposition to Hitler in the early 1930s and was influential in commenting upon latest political developments until the present day.

Hobsbawm's writings on the period since the French Revolution was hugely influential in the study of the period.  I was always interested in his thoughts on identity and nationalism.  His idea about the 'invention of tradition' certainly made its way into my thesis.  In my article of St Patrick's Day in nineteenth-century Dundee I talked about the invention of a national identity in the context of an immigrant community an idea which is largely developed from Hobsbawm's work.  On my way back from a meeting in Edinburgh this evening I listened to a really interesting programme on Radio 4 about him, the programme was made earlier this year and is well-worth listening to.

Hobsbawm was a life-long communist and this influenced his work and he was clearly influenced by the age in which he lived in.  Whilst I don't share Hobsbawm's politics I did admire his commitment to social justice.  At the end of his autobiography, which is a fascinating read, he states, 'Social injustice still needs to be denounced and fought.  The world will not get better on its own.'  I can certainly agree with these words.
Posted by Richard McCready at 00:31 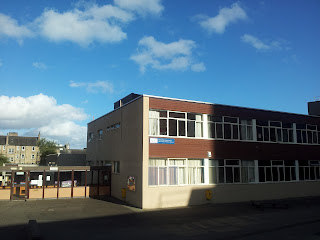 On Friday I was pleased to get along to Park Place Primary School to see their exhibition of memorabilia from the school as it prepares to move to Blackness Road and change its name after the October holidays.  Like St Joseph's which I visited earlier last week I am sure that there are many mixed emotions going on at the moment in Park Place.  It is exciting to be moving to a new home but it is also sad to be leaving an old home where generations of children have been taught and where generations of teachers and others have worked.

I hope that the new school on Blackness Road will be very successful for the teachers, pupils and everyone associated with Park Place Primary School as they become Victoria Park Primary School at their new home.
Posted by Richard McCready at 12:21 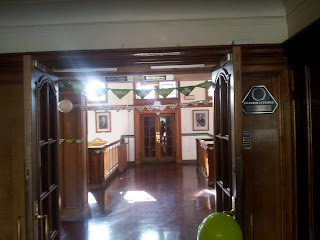 On Friday morning I was pleased to be at Harris Academy once again, this time to attend the Charity Coffee Morning held in aid of MacMillan Cancer Support and Kean's Children Fund.  This was a great occasion and it was good to see so many young people attending.  It was great to see young people organising the event.  The food which I believe was prepared in the Home Economics Department was superb and was a so much better than my dreadful efforts at cooking in Home Economics all those years ago when I was at school.  There was also some wonderful music being played by school pupils.

MacMillan Cancer Support's World Biggest Coffee Morning is a great charity and is well worth supporting and I was pleased to see pupils and staff from Harris Academy give their support.  Kean's Children Fund is a great local charity headed by Dundee's Citizen of the Year Charlie Kean, the work they do for children with cancer is amazing.

I was also pleased to see the Harris FP's association at the coffee morning selling tea-towels for funds.  The tea-towels tell a little of the history of the school and look forward to the school getting a new building in the near future. 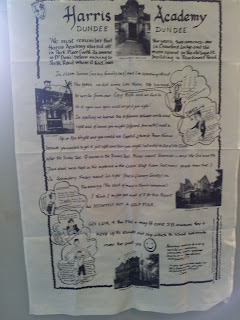 ﻿
Well done to everyone involved in a great event.﻿
Posted by Richard McCready at 11:57