As I said yesterday I think that the proposals contained in the SNP Government report on the rail service in Scotland contain some very worrying ideas.

I am particularly concerned that the proposals will lead to more changes of train and fewer direct services to Dundee. I think that having to change trains would have a detrimental effect on the attractiveness of coming to Dundee.

The V & A at Dundee will make Dundee a major destination, a poor train service will not allow our city to capitalise on this potential. We should be doing all we can to develop train services for Dundee not making them worse.

I want good services linking Dundee with the other cities in Scotland and with major cities in England and Wales. I also want to see good local services and have called for the Tay Estuary Rail Study to be implemented giving more services along the Tay from Montrose to Perth. 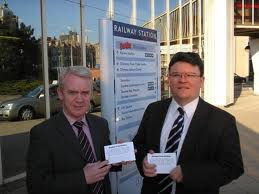 I will certainly be making the case for improvements to Dundee Station and also calling for more services to call at Dundee. The photograph shows Jim McGovern and I campaigning for better rail services in Dundee.


My colleague Lewis Macdonald MSP has highlighted a number of concerns. I think that these concerns which are outlined below could have a particularly poor impact on passengers in Dundee. A good railway system is important for Dundee's economic well-being. With the V & A at Dundee we should be looking to attract visitors by rail from all over Scotland and from England and Wales. I think that forcing passengers to change trains more would make Dundee a less attractive option as a destination.

“for current passengers, reliability and punctuality of services is one of the top priorities. Accordingly, timetable adjustments could be made to increase the time journeys take which would allow more flexibility and thereby improve train performance levels, increasing the proportion of punctual trains. However increasing journey time may result in a reduction in the number of train services that can be provided.” (section 4.8)

Ramping up fares to tackle overcrowding

“Currently the fares mechanism is designed to encourage passengers to travel in the off-peak period, where they can. However the differential between peak and off-peak fares is generally too small to have any significant impact on changing behaviour. We are considering increasing the differential in order to free capacity in the peak period to accommodate future growth. Modelling indicates a differential of at least 20% between peak and off-peak fares would be required to have any significant effect on passenger behaviours.” (section 6.27)

“We consider that the franchisee could achieve greater efficiency in the deployment of its staff and rolling stock through increased flexibility in its operations. On some routes, longer-distance services could be replaced by a number of shorter-distance services terminating at an interchange station. We want rail to be attractive to passengers, so the impacts of adding a leg to a journey, would have to be thought through carefully, particularly in terms of passenger expectations, rolling stock and train crew.” (section 5.16)

Putting new limits on the number of passengers

“We are therefore considering whether we should include a measure for how many people can be carried on a train, as opposed to just relying on how many minutes a passenger may have to stand. The carrying capacity could for example be set at 105% on certain types of service. We envisage that this would only affect the peak services, and other methods, such as fares adjustments can help to alleviate crowding on these few services.” (section 5.6)
Posted by Richard McCready at 23:54

As a local councillor I also have the chance to make a supporting nomination, I have decided to give my support to Johann and Anas as well.

I have worked with Johann over the years and have seen at first hand her commitment to social justice and equality. I have worked closely with her on promoting the co-operative agenda.

I have known Anas Sarwar for a number of years and I have been impressed by his commitment to rebuild our movement.

All six candidates offer something to the Scottish Labour Party and I would be happy to work with any of them. I look forward to working with all of them in the future. The important point for the Scottish Labour Party is to elect a Leader and Deputy Leader, develop a policy platform and an organisational structure to fight and win elections, starting with the council elections next May.
Posted by Richard McCready at 22:35

This is Alcohol Awareness Week from 14th to 20th November, to find out about work in Dundee click here, and today 15th November is the 89th anniversary of Edwin (Neddy) Scrymgeour's victory over Winston Churchill in the 1922 General Election in Dundee. It is clear that Scotland, Dundee included, has a difficult relationship with alcohol in the twenty-first century. Unfortunately, in some respects little has changed since Neddy Scrymgeour advocated prohibition in the early part of the twentieth century.

Scrymgeour's solution, Prohibition was tried in the USA and proved to be impractical, however perhaps we should see him as a figure worth reflecting on. Although elected as a Prohibitionist MP, he took the Labour whip in the House of Commons. In terms of the left at the time his views were close to being mainstream, the STUC supported prohibition at this time. For much of the 1920s his fellow MP in Dundee was Tom Johnston, the future Secretary of State for Scotland during the Second World War. Johnston supported Temperance and he and Scrymgeour argued over the issue throughout the period. Scrymgeour wanted to ban alcohol, while Johnston wanted people to make their own decision not to drink alcohol. Johnston was successful in making his home town of Kirkintilloch a 'dry' town. Pubs only opened in Kirkintilloch in the 1970s. It is clear that these two stalwarts of the left tried hard to find a solution to the problems caused by alcohol and addiction in their day. They realised that alcohol could be the curse of the working man, or working woman and their families. They recognised the problems caused in society by alcohol.

Alcohol has been joined by drugs in the twenty-first century and the problems caused by addiction continue to be a curse on many in our society. I think that this is an issue which the left should be looking for solutions for in the present day. The SNP Government has focused on the issue and their chosen solution of minimum pricing. Price is an issue worth looking at but minimum pricing will not solve all of the problems. Indeed prices in Scotland and prices in England are roughly similar but Scotland seems to have worse problems with alcohol than England. I think that we need to look at a wide range of issues and that changing the culture with regard to alcohol in Scotland should be the priority. This will not be easy but trying to find a way to deal with this issue is hugely important to the future of our country.

Minimum pricing as currently proposed will add to the profits of supermarkets. This is such an important issue to the future of our country that there should be attempts to find a consensus on a wide range of measures which will deal effectively with alcohol abuse.

Labour should reflect on the legacy of the Labour movement in the early twentieth century who saw alcohol abuse as one of the key scourges to be challenged in the new society they were trying to build.

History does not repeat itself and the solutions of the 1920s are not the solutions for the present day; but perhaps we should consider the principles which inspired people in the past and apply them in a modern setting.
Posted by Richard McCready at 20:08

There were meetings of the City Council and some of its committees tonight. The City Council considered a report about the boundary changes for Westminster elections imposed by the Tory-led government.

The Environment Committee considered a report on the work of the former Dundee Contract Services, this is a good report but it will be a real challenge for the next six months to be as good. There was a report on improvements to play areas. I welcome this and I welcome the possible involvement of 'friends' groups in future renovations of play equipment but I stressed that this was not an alternative to the council. We should encourage local people to form friends groups related to parks, and give them some involvement in the running of the park but where this is not possible there should still be support from the council.

At the Policy and Resources Committee there was to be a report on an extension to the teacher's early retirement scheme. This report was withdrawn at the last moment. This may well be as a result of the work of my colleague Laurie Bidwell who has pointed out that under the SNP Administration there are fewer teachers in Dundee, yet the SNP Scottish Government are threatening sanctions on councils which don't maintain teacher numbers. It will be interesting to see what becomes of this policy.
Posted by Richard McCready at 21:30

Research has been published on the BBC website which shows that 'Scotland's Community Council network is dying.'

In my ward in the West End we have a very active Community Council. I think that this makes the West End a better place and certainly on a number of community issues they hold local elected members to account. I was very disappointed to hear that Dundee has the lowest level of active community councils in Scotland. There are a variety of historic reasons for this but I will be asking the City Council what they are doing to ensure that more Community Councils are active in the city. 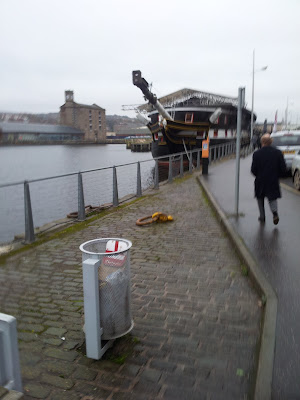 Remembrance Sunday began for me with the service at St Joseph's in the West End. I think that the War Memorial outside the church gives a fitting reminder all the time of the sacrifice made by many young people in the West End in the First World War.

In the afternoon I attended the Royal Naval Reserve Remembrance Day Memorial Service on Her Majesty's Frigate Unicorn. The preacher at the service was the Archbishop of St Andrews and Edinburgh, Cardinal Keith Patrick O'Brien. Cardinal O'Brien preached eloquently. He mentioned his own family's involvement with the Royal Navy and his father's service on the Arctic Convoys. He spoke on the need to remember those who had given their lives in the service of our country. He also spoke about the development of Christian teaching with regard to war. He spoke about the need to work for justice and peace.

In my previous job at Justice and Peace Scotland I worked closely with Cardinal O'Brien, and I know of his strong commitment to justice and peace.

Overall over the past few weeks it has been good to see so many people recognise the service which veterans have given to our country and especially those who made the ultimate sacrifice for their country. It is important to remember those have served. We should continue to support the work of poppyscotland.
Posted by Richard McCready at 22:12