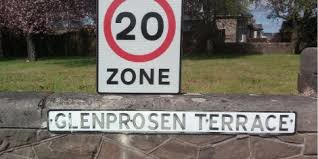 On Monday evening Dundee City Council's City Development Committee considered a report on the trail 20mph zone in the Glens and Johnston Avenue.  I welcomed that report and I called for more action to promote 20 mph zones in residential areas across the city.

My main concern is that the Glens 20mph zone was intended as a trail to influence future trials and implementation across the city. The 20mph speed limit in the Glens Area was unanimously agreed by this committee as a trial in December 2016.


b) approves an initial twelve month trial of a 20mph zone ( signed only) around the ‘Glens area.’


It appears to me that the report from Monday has forgotten that this was intended as a trial with a possibility that it might be extended.


The 2016 report recognised that 20mph are not suitable everywhere.  I was asking for a further report on where the lessons learnt in the Glens might be applicable and posing the question of whether 20mph could be the default speed limit within the city.


The City of Edinburgh has taken a decision which makes 20mph the default speed limit in residential areas and I think that at the very least we should be looking to bring forward a report on the feasibility of that.


I was not suggesting that we made a decision on Monday rather that the Executive Director returns to a future meeting with a report which takes forward the spirit of the report unanimously passed by this committee in December 2016.

I was glad to that the Committee unanimously agreed to this proposal and that a further report on 20 mph zones will be brought forward.
Posted by Richard McCready at 16:15