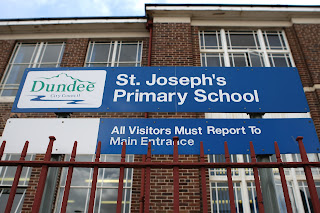 At this week's meeting of the City Development Committee there was an item which sought to name the street at the development of houses at the new development on the former St Joseph's Primary School site.

In the past couple of months as work has taken place to knock down the old building a number of former pupils have spoken to me about their wish for the history of the site to be acknowledged.  I raised this with the City Development Department asked for my views on the street name I made my view known that I think that it should reference the former use of the site.  Therefore I was glad when the proposed name suggested was St Joseph's Court.  I think that this will allow the history of the site and the over eighty years of education to be marked.   I am glad to say that the new school is going from strength to strength on its new site but I felt it was important to acknowledge the history and heritage of this site.
Posted by Richard McCready at 00:14