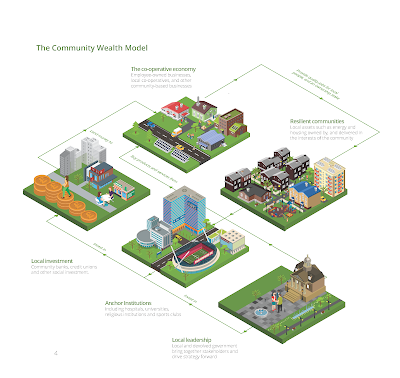 On Monday evening Dundee City Council considered a report on the proposals to build an AC Marriott Hotel at Site 6 in the Waterfront near to the V & A.  I welcomed the report mostly because the council was retaining ownership.  This is the sort of thing that the Co-operative Party and people like John McDonnell have in mind when they  discuss things like Community Wealth Building.

I warmly welcome this report and want to stress how much the Labour Group supports Dundee City Council retaining ownership of the assets being developed at the Waterfront.

I think that it is very important that the council does retain an element of ownership in parts of the Waterfront.  That way, the people of Dundee will get some benefit from it.  It is important that the assets of the Waterfront continue to produce wealth for the community and it is good to see that the plan isn't to sell the assets off to some off-shore corporation that won't pay tax in Scotland, or possibly anywhere.

I hope that further proposals in Dundee will continue in this way.  It is a way of ensuring that some of the wealth created by these developments stays within the city and is of benefit to the many, rather than just the shareholders.
Posted by Richard McCready at 18:49